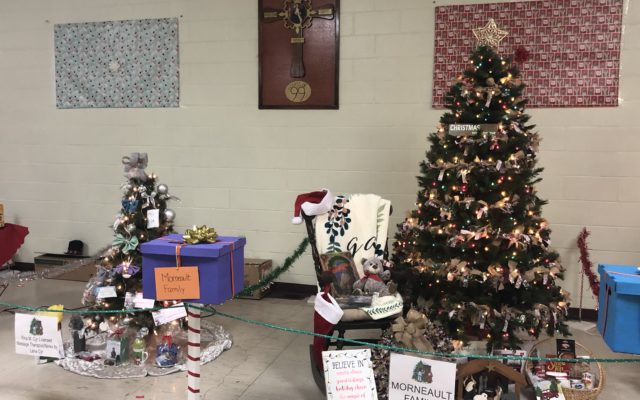 MADAWASKA, Maine — Nearly 1,500 people kicked off their Christmas season with the 2nd annual Christmas Tree Festival hosted by the Daughters of Isabella Nov. 29-Dec. 1 at the KC Hall in Madawaska.

The Daughters of Isabella is a non-profit Catholic group of women that does good things throughout the community, chairman Deadra Schlicher said.

The women will use proceeds from the fundraiser to make care packages for cancer patients and Christmas stockings for nursing home residents, as well as to fund scholarships for high school seniors.

“As chairman of this event, I can tell you that there was a lot of work that went into this event by myself, my parents, family and members of the Daughters of Isaballa. However we could not have had a successful event without the generous donations of the local businesses, organizations and families that participated,” Schlicher said.

“We saw a lot of people enjoying themselves from young to old, which was part of our goal, to have an event that is fun for everyone,” she said.

The hall held nearly 30 trees that sparkled with glitter and gleaming lights, surrounded by presents donated by local businesses. As people entered the hall, they were greeted by volunteers who sold 10 raffle tickets for $5.

The guests viewed all the trees and dropped tickets into the boxes of whichever trees they wanted to win.

“This year’s event was a huge success. The money that we raised is already getting put to good use with our next project — Christmas stockings for nursing home residents,” Schlicher said.

Each tree had a theme to it based on the donor, though some were designed for the entire family in mind. The Meals on Wheels tree had everything needed for the kitchen. The Madawaska Recreation Department included balls and gift certificates for ice skating and summer camp admission. And the All About You Day Spa display was decked out in a bright red and white Christmas tree, while gifts of at-home relaxation enhancers were tucked under the tree.

One man won three trees Sunday, when they called the winners.

“I really don’t want to say how many tickets I put in because the wife will probably kill me,” said three-time winner Ken Cormier.

Cormier said he plans to give all the toys to his grandkids and neighborhood children. His mother was one of the Daughters of Isabella out of Van Buren, and he said he supports the group as much as he can.

“Despite just finishing the event for the year, our wheels are already turning, and planning has begun for next year’s event,” Schlicher said.