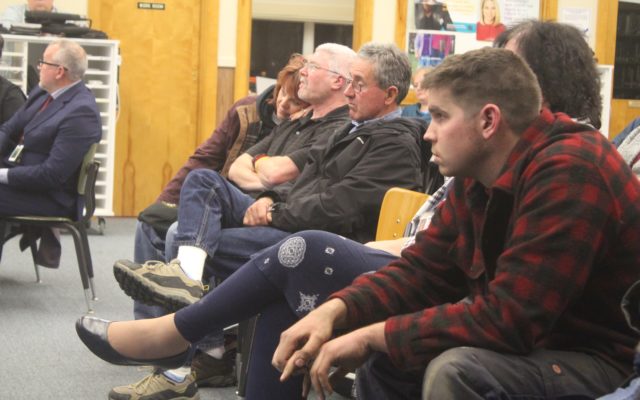 Jessica Potila, SJVT / FhF Staff Writer • December 4, 2019
A Fort Kent seventh-grader recently took it upon herself to ask her classmates where they would like to see a new regional school built in the St. John Valley.

FORT KENT, Maine — Locating a site for a proposed new regional school in the St. John Valley has been a controversial topic in the area ever since the Department of Education agreed in 2018 to provide up to $100 million to fund the school.

A Fort Kent seventh-grader recently took it upon herself to ask her classmates where they would like to see a new school built.

If approved by voters and the education department, the school will ultimately replace schools in SAD 27, SAD 33 and Madawaska School District, which currently serve middle school students in grades seven and eight as well as high school students.

The three administrative units are joined under the umbrella of the Valley Unified Education Service Center.

A 17-member Valley Unified Site Selection Committee representing all three school administrative units unanimously agreed in October to select a site in Frenchville for the new school, over another proposed site in Fort Kent.

The SAD 27 board, citing concerns over the site selection process and future costs to the district,  hired an attorney to review an interlocal agreement entered into by the three units.

One suggestion that consistently seems to find its way into arguments at school board meetings and on social media is that the communities involved should “ask the kids” how they feel about where the new school should be built.

Avery Ouellette of Fort Kent did just that when she emailed survey questions to her classmates in seventh grade at Valley Rivers Middle School, and those in sixth grade at Fort Kent Elementary School.

“I decided to do the survey because I wanted to know how other students felt about the new school,” Ouellette said.

Ouellette, who plans to become a meterologist one day, received replies to her survey from 73 students — nearly 50 percent of those currently attending sixth and seventh grades in SAD 27.

As part of the unscientific survey, Ouellette asked the student respondents to name the town in which they currently live.

The majority, 60.3 percent, said they live in Fort Kent, followed by 11 percent in Eagle Lake and 9.6 percent in Daigle/Wallagrass. The rest of the respondents indicated they live in Allagash, St. Francis, Winterville, St. John Plantation and Frenchville.

Most of the other respondents indicated that they were undecided as to where the new school should be located, although one imaginative or otherwise hopeful middle school student recommended it be located in Alabama.

“I did not think so many people would respond. It made me realize just how important the school location is to the students,” Ouellette said. “I think that people should know how the majority of the students feel about the new school since we are the ones attending it.”

Ouellette also provided the students an opportunity to reply to the following question: “How would you feel about the new school being in Frenchville?”

Among the replies were “good;” “I think that it would be okay in Frenchville, but I would rather it be in Fort Kent;” “I feel that in Frenchville they do not have a lot of stuff so it would be weird having something there;” and  “I hate it and I’m not going.”

The students who responded to the survey indicated a fairly close split as to how they travel to school, with 43.8 percent saying they only ride the bus, 38.4 percent saying their parents drive them, and others saying they receive rides to school with siblings or a combination of the above. A few students said they currently walk to school.

One student claimed to travel to school via airplane. It is unknown if this is the same student who claims to live in Alabama.

Ouellette has her own opinion about where she thinks the new school should be.

“I would want it to be in Fort Kent because I like the school being part of the community that I live in. I would like the school to be here because there’s a lot more to do like skiing, restaurants, Fort Kent Outdoor Center and the University of Maine at Fort Kent.  I love to walk to school and some of my friends do too,” she said.

“It would be really sad if the school was built in Frenchville because there is almost nothing there compared to Fort Kent. There are way more kids in MSAD 27 than there are in Madawaska and Frenchville. It doesn’t make sense to me to transport more kids to an area with fewer resources.”

Ouellette’s unscientific survey is the only known of its kind regarding student feedback about a site for the proposed regional school.

Valley Unified coordinator of innovative practice and community outreach Peter Caron said school officials have not surveyed students in grades six and seven regarding their preference of a site for the new school.

Ben Sirois, superintendent of both SAD 27 and Valley Unified, said the new school, if approved by voters and the department, would most likely be realized in 2024 or 2025.

As the Maine Turnpike expects 1 million travelers alone over the Labor Day weekend, policymakers are gearing up for a sprint to solve one of the state’s most intractable problems: a long-standing — and growing — transportation funding gap.
Apex Weather END_OF_DOCUMENT_TOKEN_TO_BE_REPLACED

The Valley will receive an inch or less of accumulation from Thursday's system based on current forecast model data.
Our Sponsors END_OF_DOCUMENT_TOKEN_TO_BE_REPLACED