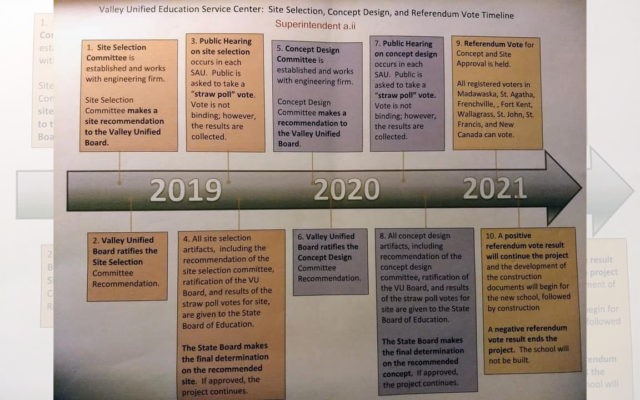 Jessica Potila, SJVT / FhF Staff Writer • December 3, 2019
A Facebook page in support of a new regional school in the St. John Valley attracted more than 1,200 community members within a few days of its creation.

FORT KENT, Maine — A Facebook page in support of a new regional school in the St. John Valley attracted more than 1,200 community members within a few days of its creation.

Last year, the state authorized funding up to $100 million for a new St. John Valley educational facility that would replace the three high schools in SAD 27, SAD 33 and Madawaska School Department. On July 30, a Valley Unified Board, composed of members from the three school administrative units, voted to add grades seven and eight to the school.

The proposed school has been clouded in controversy, most recently as a Valley Unified Site Selection Committee voted to place the school in Frenchville.

SAD 27 school board members have since hired an attorney to look into the site selection process and explore long-term costs for funding the school.

“There is a core group in the Valley who really want to see this school happen. I thought that by creating a group for like-minded people, we could come together and discuss ways to move that forward, without discussing location,” Pelletier said. “I think that’s an issue that can be continued to be debated elsewhere. We need to move forward on making sure the school is built. I think that by engaging citizens at that level, we will have a better chance if that’s the goal.”

“So the purpose of the group is, one, to kind of bring those folks together that are wanting to see the school happen and also giving citizens an opportunity to weigh in as to what kind of questions they feel need to be answered from here forward,”  Pelletier added.

Although discussing the site selection for the new school is discouraged on the Facebook page, other questions about the regional school process are welcome.

“One of the concerns I see on Facebook and elsewhere is ‘Is this going to cost me more money in taxes by building a new school?’ That’s just one example of the types of questions school administrators are working on, and I think it’s really healthy for the community to express that too so people realize they are not being overlooked or forgotten,” Pelletier said.

Pelletier pointed out that students in the three school administrative units are less divided than the adults who will ultimately be tasked with voting for or against the new school at a referendum.

He mentioned how student athletes have worked together in County sports programs, such as the Aroostook Youth Basketball League, and that since the three administrative districts have merged, students from the three high schools have enjoyed taking part in music and drama programs together.

“I see these kids right now, how they come together for certain programs, certain athletic things and there is really a camaraderie there,” Pelletier said.

Pelletier is open about his support of the regional school, and such is also the theme of the Valley United Citizens Group Facebook page.

“If you build a building like this, a state of the art educational facility, all of these communities are going to benefit, no matter where it is,” Pelletier said. “From an economic development standpoint the whole region will benefit from our new school.”