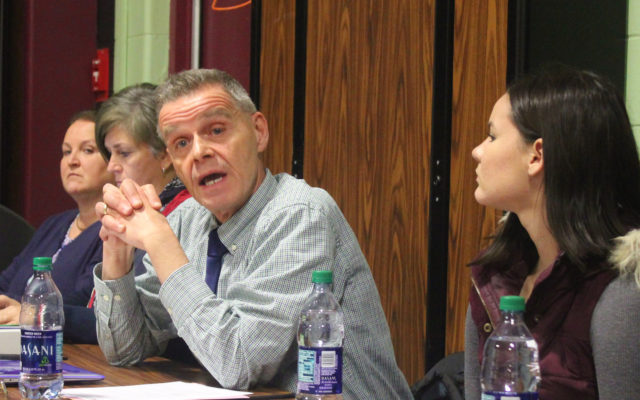 Jessica Potila, SJVT / FhF Staff Writer • November 26, 2019
Members of the SAD 27 Board of Directors indicated at a public meeting Nov. 19 they are in favor of a proposed state-funded regional school which, if approved by voters, would serve grades seven-12 students in the St. John Valley.

FORT KENT, Maine — Members of the SAD 27 Board of Directors indicated at a public meeting Nov. 19 they are in favor of a proposed state-funded regional school which, if approved by voters, would serve grades seven-12 students in the St. John Valley.

But the five board members attending voted unanimously to hire a lawyer to address concerns they have regarding an interlocal agreement the board entered into with SAD 33 and Madawaska School Department when the three school administrative units formed the Valley Unified Regional Service Center, now known as the Valley Unified Education Service Center.

The board is using the law firm Brann & Isaacson in Lewiston.

At Tuesday’s meeting, SAD 27 board member Gary Sibley Jr. said he felt confident in saying “this board is 100 percent on board with seeing this school happen, but we do have questions that we need answered. We have to be fiscally responsible.”

“The state process, the way it goes, it puts the cart before the horse on so many things here,” Sibley Jr. added.

He pointed out that the Valley Unified Site Selection Committee, which unanimously agreed in October to a site in Frenchville for the new school, may not have considered additional expenses such as well maintenance and transportation costs. He said those expenses could disproportionately affect SAD 27 taxpayers down the road.

“We don’t know what those costs are. We should know that before we choose a site.

If this were private business, you would never do it this way, never. You’re not gonna start something and not know what the costs are,” Sibley Jr. said. “The projected life of the school is 75 years, so these costs are gonna stay with us for 75 years. We should know what those costs are.”

The 17-member Site Selection Committee reviewed a site selection matrix that favored the  Frenchville site by three points over a site in Fort Kent. The final scores were 147 and 144, respectively.

Sibley Jr. pointed out issues regarding the matrix used to select the site.

“The matrix was a headache from the beginning,” he said. “There were issues the first time around. There’s some issues on the second time around — things taken out that really make no sense why they were taken out. The original intent of the second matrix of having priority one items and priority two items were to weight the matrix so that a scenic view did not count the same as the cost of transportation or something that was significant or important. That didn’t happen; that’s not a weighted matrix.”

Sibley Jr. said the board does not have faith in the site selection process and therefore does not feel comfortable looking at Fort Kent voters and saying with confidence the Frenchville site was the best option.

“We want an outside party to look into the interlocal agreement that we’ve entered into,” he said.

About 75 people attended the school board meeting, including community member Carl Chasse who asked the board if Valley Unified would also be hiring an attorney.

“I don’t know,” board member Toby Jandreau said. “I don’t tell Valley Unified what to do; in fact part of the problem is that SAD 27 has very little say in what Valley Unified does. So if Valley Unified wants to hire an attorney, they’ll have enough votes for it.”

Jandreau also explained at the meeting that, per the interlocal agreement, SAD 27 only has one-third of the votes on the Valley Unified board, yet is responsible for at least 50 percent of the Valley Unified budget, with that percentage expected to grow in the coming years.

“We don’t currently have a vote proportionate to our contribution,” Jandreau said. “Our vote is proportionate to a third, so if there’s a disagreement in Valley Unified, we could end up paying all of the bill. We don’t have a majority and that’s what we’re talking about and I think that’s part of the interlocal agreement that we need to look at further.”

Site Selection Committee member Doug Cyr made an impassioned plea to the board and the community to continue forward with the multiple-step school regionalization process, which Ben Sirois, superintendent of both SAD 27 and Valley Unified, said at the meeting could possibly only be realized in 2024 or 2025.

Cyr pointed out that there are several upcoming non-binding straw polls to gauge community support for the project.

“The $100 million — we’d be foolish regardless to vote any straw poll down and get all our facts, get all our costing, and then make a wise decision … ,” Cyr said. “If we turn this down, I sure hope that the 51 percent that vote against it will be at the next school board meeting to vote the budget in … .”

Sibley Jr. explained at the meeting that by hiring a lawyer, the SAD 27 board was merely seeking information and clarification about the interlocal agreement as representatives of the district, and not attempting to thwart efforts for a regional school in the St. John Valley.

“We’re not looking to do away with the school, not by any means at all. We want it as bad as Frenchville, as bad as Madawaska,” he said.

To view the Tuesday, Nov. 19, meeting of the SAD 27 school board, visit the WFKTV Channel 4  Facebook page.

A cold front moves through today with scattered showers that will taper off this evening as high pressure builds into the region with partly cloudy skies.
Crown Politics END_OF_DOCUMENT_TOKEN_TO_BE_REPLACED

All five candidates running for two seats on the Fort Kent Town Council gathered at a live question and answer forum.
Our Sponsors END_OF_DOCUMENT_TOKEN_TO_BE_REPLACED