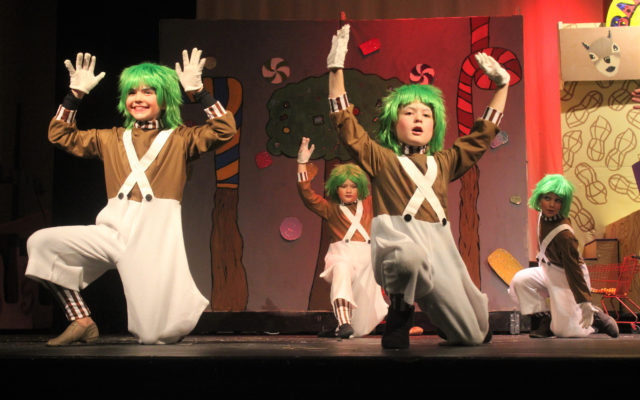 Jessica Potila, SJVT / FhF Staff Writer • November 26, 2019
Despite sleet and freezing rain that prompted a National Weather Service warning and resulted in after-school activities being canceled during the evening of one performance, the musical “Charlie and the Chocolate Factory” drew at least 1,000 audience members last week in Fort Kent.

FORT KENT, Maine — Despite sleet and freezing rain that prompted a National Weather Service warning and resulted in after-school activities being canceled during the evening of one performance, the musical “Charlie and the Chocolate Factory” drew at least 1,000 audience members last week in Fort Kent.

“The play was aimed at family audiences and community members from grandparents to grandchildren,” play director Doug Clapp said.

Pamela Bouchard of Wallagrass brought her young daughters Maddie and Scarlett Granatowski to see the musical on Friday night.

“I thinked it was good,” said Maddie Granatowski.

The 5-year-old Fort Kent Elementary School student added that her favorite part of the production was when Charlie received his golden ticket to visit Willy Wonka’s chocolate factory.

Maddie was so impressed by the musical that she returned on Saturday afternoon to watch it again with family friends.

Scarlett, who saw the show a week before her third birthday, said her favorite part “was when they went in the rocket ship and when my dance teacher turned into a blueberry.”

“My next favorite part was the Oompa Loompas,” Scarlett added.

The Willy Wonka magic continued throughout the weekend in the Bouchard/Granatowski home.

The 26 students who performed in the musical ranged in age from from first grade to high school and spent more than two months preparing after school for the production.

“Educationally, theater is one of the soundest extracurricular activities available to students,” he said.

Clapp said this became especially clear to him when he applied for grants a few years ago to try and help the high school obtain funding for an auditorium.

“We went through all the Maine learning results at that time, the standards, and theater was hitting dozens of them. Just when you went through English learning results, it was hitting it not just in one or two places but a lot of it. It was also hitting on historical research,” Clapp said. “You might get students who are struggling in subjects and find they can actually memorize pages of script; it’s just an alternate way of learning.”

Additional learning opportunities for the students included teamwork development and even carpentry skills for some students, according to Clapp.

Students not involved directly with the play helped construct platforms for the set and each received a free ticket to attend the play.

“They saw how their skills could be put to use in theater,” Clapp said.

Connor Pelletier, a Fort Kent Community High School freshman who performed as the snack-loving Augustus Gloop in the musical, said he “gained friendships with other people” during the rehearsal process for “Charlie and the Chocolate Factory.”

“It’s like we have our own little family,” he said.

Pelletier’s portrayal of Gloop drew wild laughter from the crowd during the show’s finale on Saturday evening, especially when Gloop climbed into a tub of chocolate pudding and greedily indulged in the dessert.

With plastic liners to clean up the mess set-wise during each performance, there was just one slight pudding-related hiccup.

“I heard that the Oompas were sneaking backstage and sticking their fingers in it,” Clapp said.

Multiple community members came together to help Clapp with the show, including music teacher Samantha Boutot, who served as conductor, Fort Kent Town Manager Suzie Paradis as choreographer and educator Jocelyn Saucier who stepped into the role of costume coordinator. Educator Samantha O’Clair served as secretary of the production.

“To see it all come together and see the faces on the kids feeling great about their show and their confidence on stage, this is educational, it’s fun. It’s a great connection between the schools and the community,” Clapp said.

He said he hopes school board members, school administrators and community members will appreciate that connection, and plan ahead for his successor. He said he would like to help that educator transition into the role. He said he has seen communities where drama educators retire and are not replaced.

“They have to look down the road a bit,” Clapp said. “I’m not talking about a specific plan to stop, but I have to be realistic; I’m 68 years old.”

For now, Clapp is already planning for next year’s musical. He said many parents have suggested he consider directing the musical version of “How the Grinch Stole Christmas” in 2020 and he is looking into it.

Whatever script Clapp decides on for next year, Pelletier said he is ready to go.

“Let’s start up the next show,” Pelletier said.

As the Maine Turnpike expects 1 million travelers alone over the Labor Day weekend, policymakers are gearing up for a sprint to solve one of the state’s most intractable problems: a long-standing — and growing — transportation funding gap.
Apex Weather END_OF_DOCUMENT_TOKEN_TO_BE_REPLACED

Mostly cloudy skies will develop after midnight as a warm front moves across the area with some snow flurries possible overnight.
Our Sponsors END_OF_DOCUMENT_TOKEN_TO_BE_REPLACED