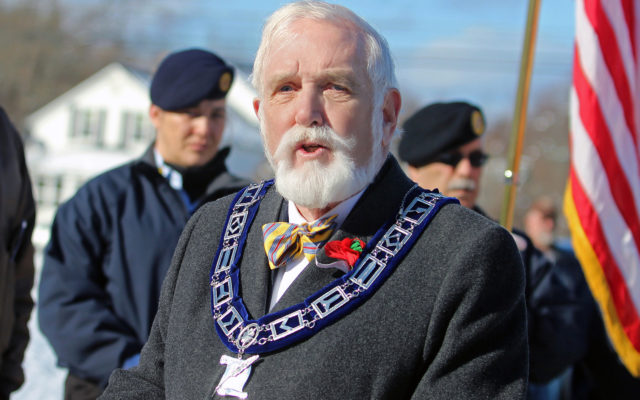 Joseph Cyr • November 21, 2019
Houlton attorney Richard Rhoda is renowned throughout southern Aroostook County as a man who is fiercely passionate about history and culture in the Shiretown.

HOULTON, Maine — Houlton attorney Richard Rhoda is renowned throughout southern Aroostook County as a man who is fiercely passionate about history and culture in the Shiretown.

When first approached to be interviewed for County Faces, Rhoda’s modest reaction was that he “wasn’t old enough yet” to be considered for such an article before eventually agreeing.

“I am in the first year of the last quarter of my first century,” Rhoda said of his age, which places him at 76. “I know that faces and names come and go (‘All is vanity,’ sayeth the Preacher), but what we preserve and pass on is what endures for all.”

Rhoda was born in Presque Isle in 1943 to Leslie and Ellen Rhoda and spent the majority of his life splitting time between Houlton and Orient, where the family has a camp on Grand Lake.

“I was a fortunate product of the ‘Greatest Generation,’ but did not really realize it,” he said. “From a father who felt an obligation to public service was part of one’s being, and a mother who was ever committed to helping the ‘youngins,’ I slowly developed an appreciation of what I owed to the next two or three generations.”

To many, he is the man of many bowties, a tradition he picked up dating back to his time at Kents Hill School, a private, coed boarding school located in Kents Hill, where bowties and formal attire were the norm for young men. Plus, his parents owned a dry cleaning business, so he always had freshly pressed shirts and pants.

In college at the University of Maine at Orono, Rhoda first studied to be a dentist, but ran into an unfortunate wall.

“My grades were not good enough in pre-med,” he said.

So he switched courses to become a lawyer and opened his practice in Houlton in 1972.

Rhoda studied abroad for a portion of his junior year and later served in the U.S. Army in Europe for three years. During his time in Europe, Rhoda said he was deeply moved by the rich culture and heritage.

“I saw the great cathedrals, palaces and majestic views which were fleetingly appreciated,” he said. “Yet, they made a lasting impression on me.”

Returning to Houlton to live, work and raise a family, Rhoda said there was no better place to achieve these goals.

“I pursued my fascination with history on the local level,” he said. “From whence came we? Wither are we traveling? What will we pass on that will have some lasting value beyond our time?”

A longtime member of Masonic Lodge No. 96, Rhoda has always been fascinated with history, architecture and culture.

“At some point — I don’t remember exactly when at this time, maybe about the time the George

Washington Monument was being considered for Market Square — I said to myself, ‘Why can’t we do that in Houlton, Maine?’” Rhoda recalled. “We are not London, Paris or Rome, but we are Houlton, and we can do it here if we want to, if we believe in it and are committed.”

Rhoda, through his work with the Masonic Lodge, helped secure tombstones for soldiers who served at Hancock Barracks from 1828 to 1844 and was also the catalyst in seeing Houlton’s clock tower covered with new gold leaf in 2018.

For him, it’s all about preserving the town’s own rich legacy.

“In a few years our surname will be gone from the area, but we will have helped pass things on that will last for generations,” he said, “and, more importantly, may have inspired others in their appreciation of Houlton, our town, to preserve and promote it.”

As the Maine Turnpike expects 1 million travelers alone over the Labor Day weekend, policymakers are gearing up for a sprint to solve one of the state’s most intractable problems: a long-standing — and growing — transportation funding gap.
Apex Weather END_OF_DOCUMENT_TOKEN_TO_BE_REPLACED

The Valley will receive an inch or less of accumulation from Thursday's system based on current forecast model data.
Our Sponsors END_OF_DOCUMENT_TOKEN_TO_BE_REPLACED