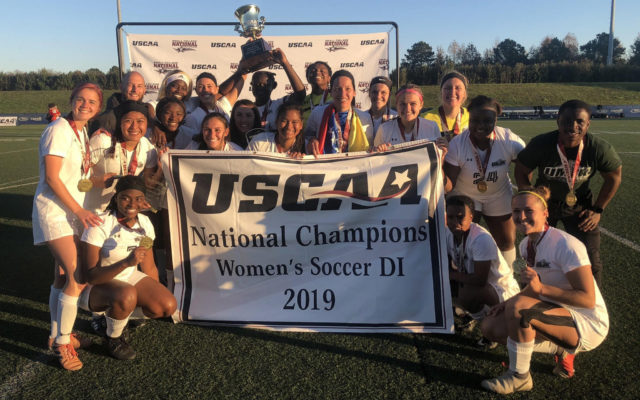 Contributed • November 19, 2019
As Charles Dickens once said, “It was the best of times, it was the worst of times…” And the same could be said for the incredible roller coaster of emotions the University of Maine at Fort Kent athletics teams went through as their season ended just a couple of weeks ago.

VIRGINIA BEACH, Virginia —As Charles Dickens once said, “It was the best of times, it was the worst of times…” And the same could be said for the incredible roller coaster of emotions the University of Maine at Fort Kent athletics teams went through as their season ended just a couple of weeks ago.

As some teams enjoyed the ecstasy of accomplishing a season-long goal, others felt the agony of defeat after coming oh so close.

According to UMFK sports information representative Fletcher Brown, each of the UMFK fall sports teams struggled out of the gates during their respective 2019 seasons, either losing their first regular season game or their first exhibition match, and for the women’s soccer team, they even lost their coach shortly before the beginning of the season. But perseverance was the name of the game for the Fall sports teams as they showed an incredible amount of grit and never lost sight of their goal, which was a USCAA National Championship. After racking up wins throughout the season, each one of the teams finished as the number two ranked team in the USCAA, respectively.

The men’s soccer team began pool play at the USCAA National Championship tournament with a tie against the Mississippi University for Women 1-1, but then defeated Florida National University 2-0 to advance to the National Championship final. Waiting for them was the only other team that rivaled them for USCAA prominence, the Bobcats of Bryant & Stratton Syracuse. The Bobcats and Bengals matched up in Fort Kent earlier in the season where the game ended in a 1-1 draw. This was a match-up between the top two teams in the USCAA, fans could not have asked for a better championship game. Unfortunately, in the 76th minute, Jon Stublla of Bryant & Stratton scored the lone goal of the game, and the Bobcats took the championship. The Men’s soccer team finished as the National Runner-Up and have a lot of incredible wins and moments to look back on in what was a tremendous season.

It is safe to say that the only people who thought that the UMFK Women’s Volleyball team would play in the National Championship Final, were Coach Selina Castro and the seven young ladies on her team. They started out the season losing their first two matches, but banded together and compiled a 13 win season and earned the number two spot at the USCAA National Championship tournament. Two wins in pool play over Mid-Atlantic Christian University and Bluefield State got them to the National Championship Final match where they lost in three close sets to Florida National University. The Women’s Volleyball team has a lot to be proud of, despite finishing as the National Runner-Up, the young ladies on the team put together an outstanding season, with multiple players finishing in the top five statistically in some of the major stat categories including kills per set, assists per set, hitting percentage, blocks per set and service aces.

The UMFK Women’s Soccer team has perhaps the best story of all, losing their coach just a few days before preseason practices were set to begin, they had a slow start to the season, even losing one of their first matches 10-0. Despite injuries to some key returning players, a new coach in Alex Smith, and a scheduled that included NCAA Division 1 opponents, the Lady Bengals would not be denied another championship and kept the dominant Bengal soccer dynasty alive for another season. Finishing the season with a record of 12-6-1, the Bengals entered the USCAA National Championship tournament as the number 2 seed and picked up two wins in pool play over the Mississippi University for Women to advance to the championship final against Florida National University. Yuliana Sanchez dribbled between two defenders and found the back of the goal to put the Bengals up one in the first half, but Florida National responded early in the second half with a goal of their own off a corner kick. Tolu Oyeniyi, one of the leading goal scorers in the USCAA, was able to score in the 85th minute off an assist from Angely Carreno. It was a thrilling match that could have gone either way, but the perseverance of the Bengals and the winning make-up of the roster  would not be denied victory. This is the eighth championship for the Women’s Soccer team since 2010.

A warm front will approach the Valley today and cross the region this evening.
Our Sponsors END_OF_DOCUMENT_TOKEN_TO_BE_REPLACED