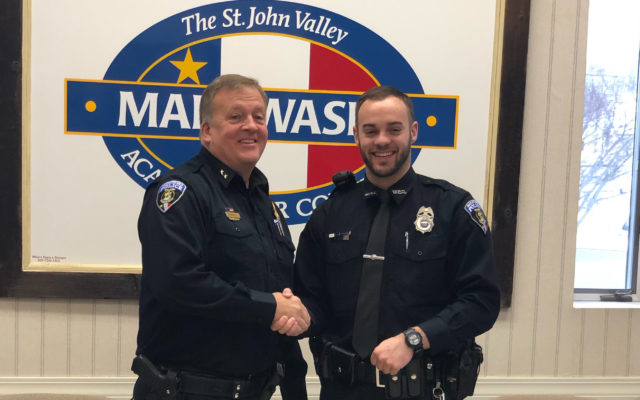 Madawaska gets a new sergeant

Morgan Mitchell • November 16, 2019
The Madawaska Police Department has a new sergeant after they promoted Garrett Albert to the position on Friday, Nov. 15, at the Madawaska town office.

MADAWASKA, Maine — The Madawaska Police Department has a new sergeant after they promoted Garrett Albert to the position on Friday, Nov. 15, at the Madawaska town office.

A vacancy earlier this winter left the department short a leader. After rounds of tests and interviews, the department selected Garrett Albert to assist in leading the officers in Madawaska.

“I want to congratulate Sgt. Albert on his promotion to the sergeant position,” Chief Ross Dubois said Friday. “His dedication to the municipality and the police department is evident.”

Albert had family and friends along with other officers from the department there for the ceremony.

“With this promotion, the police department and community are conveying the kinds of actions, behaviors and values to the other police officers that we’d like to see in their attitudes, outlooks, contributions and commitment,” Dubois said.

Albert said he was happy to get the promotion and that he is ready to be a leader.

“It’s a big accomplishment, especially in this line of work,” Albert said. “We don’t always get recognized for good stuff. We are usually around for the bad stuff. So it is nice to be able to move up.”

While he said that nothing will really change with his fellow officers, he hopes to bring a little extra to the table.

“I hope to bring a little optimism to the PD,” he said. “I’m still one of the guys. I am really grateful to become a supervisor in this community.”

A warm front will approach the Valley today and cross the region this evening.
Campaign Corner END_OF_DOCUMENT_TOKEN_TO_BE_REPLACED

Dale Crafts filed his nomination papers for Feb. 21 with the Secretary of State to officially be placed on the primary ballot on June 9, 2020, for the U.S. House of Representatives 2nd District race.
Our Sponsors END_OF_DOCUMENT_TOKEN_TO_BE_REPLACED