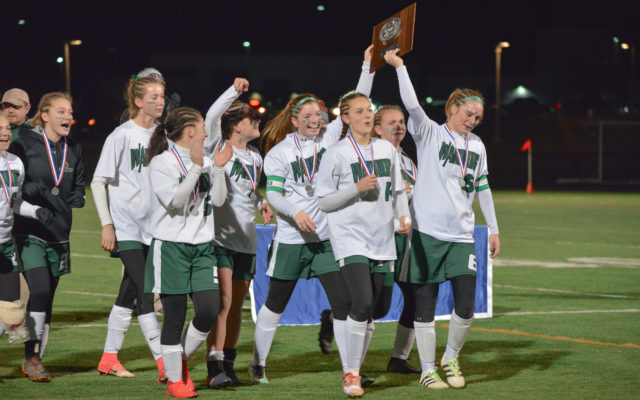 FALMOUTH, Maine — The Fort Kent Community High School Warrior girls soccer team are Class C runners up in the state as Traip Academy won its first girls soccer state championship since 2001 when the two teams played on Saturday in Falmouth.

“Our girls played the season with a lot of heart and pride,” said Warrior girls head coach Doug Cyr. “Although a state ball would have been the ultimate award, players and fans cannot take away the fact that not many have gotten to this stage and for that, we are very proud of them.”

This is the second state appearance in two years by the Warrior girls under the guidance of Cyr and his coaching staff, Michelle Lovley and Valerie McBreairty, the three of whom are only in their second year of working together.

“From the first day we stepped on the field on July 15th, we knew it was going to be another special year. We had a solid returning group of athletes with five seniors and a healthy group of freshmen. As the season went on we had our mid-season eye opener with our second game against Houlton, where we suffered our first loss to a strong and experienced Shire team. From that point, our girls stepped it up, and went undefeated to the state game,” Cyr said.

“The special thing about this team is their ability to play multiple positions and contribute in either defense or offense,” Cyr added. “We had 16 of our 18 varsity players contribute to either a goal or an assist.  Of them we had six ladies in double figures. On top of that, we finished the regular season with seven shutouts and only allowed 12 goals.”

The field seemed to be tilted in Traip Academy’s direction for much of the first half on Saturday night.

Finally, the Rangers were able to cash in.

Kathleen McPerson and Sophia Santamaria scored goals in the final 65 seconds of the period, providing the impetus for a 3-0 victory over Fort Kent in the Class C girls soccer state championship game at Falmouth High School.

It was the first title-game appearance since 2001 for the Rangers, who finished the season with a 16-2 record.

The game matched the high schools that are located geographically the farthest apart from north to south. It is 362 driving miles between Kittery, which borders New Hampshire, and Fort Kent, which is just south of the Canadian border.

Coach Doug Cyr’s Warriors had been holding on in the face of relentless pressure by Traip Academy in the first half. Fort Kent had made a handful of forays deep into the Rangers, but also with no results.

McPherson put Traip on the board off a corner kick to the right of the goal. Santamaria’s service bounced around in front, where McPherson had enough time to settle the ball off her body and unleash a hard shot into the goal with 1:06 to play in the half.

The Rangers scarcely had time to complete their celebration when opportunity knocked again. With 15 seconds remaining in the half, a Fort Kent player was whistled for a hand ball just outside the top of the box on the right-hand side.

Santamaria made it count, lofting a high shot directly into the upper far corner, well out of the reach of goalkeeper Lyndsay Ouellette.

Ouellette played well for the Warriors, who had some spurts of attacking pressure during the middle of the first half, but their limited shots were turned away.

Fort Kent was able to sustain some possession early in the second half, and even hit the crossbar twice after intermission, but the Warriors weren’t able to convert.

The Rangers eventually pushed the margin to 3-0 about halfway through the second half. McPherson again was the catalyst as she moved the ball around a defender in the middle, then slid a nifty pass to her left. Julia Durling took it and tucked it inside the left post with 19:35 to play in the contest.

McPherson proved to be a handful for the Fort Kent defense, which tried to counter her shiftiness and quickness with a more physical style, but wasn’t able to keep her from controlling action in the offensive third.

As the Maine Turnpike expects 1 million travelers alone over the Labor Day weekend, policymakers are gearing up for a sprint to solve one of the state’s most intractable problems: a long-standing — and growing — transportation funding gap.
Apex Weather END_OF_DOCUMENT_TOKEN_TO_BE_REPLACED

The Valley will receive an inch or less of accumulation from Thursday's system based on current forecast model data.
Our Sponsors END_OF_DOCUMENT_TOKEN_TO_BE_REPLACED