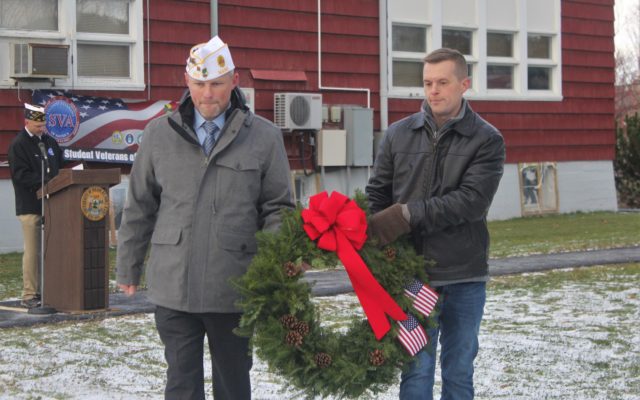 Jessica Potila, SJVT / FhF Staff Writer • November 11, 2019
A bitter chill in the air did not deter nearly 75 people from demonstrating their respect for past and present American service members who have and continue to risk their lives to serve our country.

FORT KENT, Maine — A bitter chill in the air did not deter nearly 75 people from demonstrating their respect for past and present American service members who have and continue to risk their lives to serve our country.

The special gathering was for the University of Maine at Fort Kent Student Veterans Association flag raising ceremony held Saturday, Nov. 9, on the lawn of the Old Model School Building.

“We are here today to honor our service members and to remember their sacrifices that they have made and the courage it takes to defend, honor and serve the greatest country in the world,” said UMFK Veterans Association President Leroy McKenzie, a United States Air Force veteran who also serves as American Legion Post 133 Service Officer and American Legion District 17 Americanism Officer.

“I would like to thank all of our veterans for not only answering the call to duty but for also serving our great country, no matter what the cost.”

Fort Kent Town Manager Suzie Paradis also spoke at the ceremony where she expressed gratitude for all United States military members, past and present.

“Your service and sacrifices have and continue to keep our country safe and free,” she said. “No matter which branch you served, whatever your job path or how many years you served, your commitment to serve in the military was and is a brave and selfless act, one that has no guarantees of where you may be assigned or deployed and in some cases if you would return home in one piece or at all. For this service, we can sleep peacefully at night. Military men and women risk much and accept those risks so others won’t have to.” 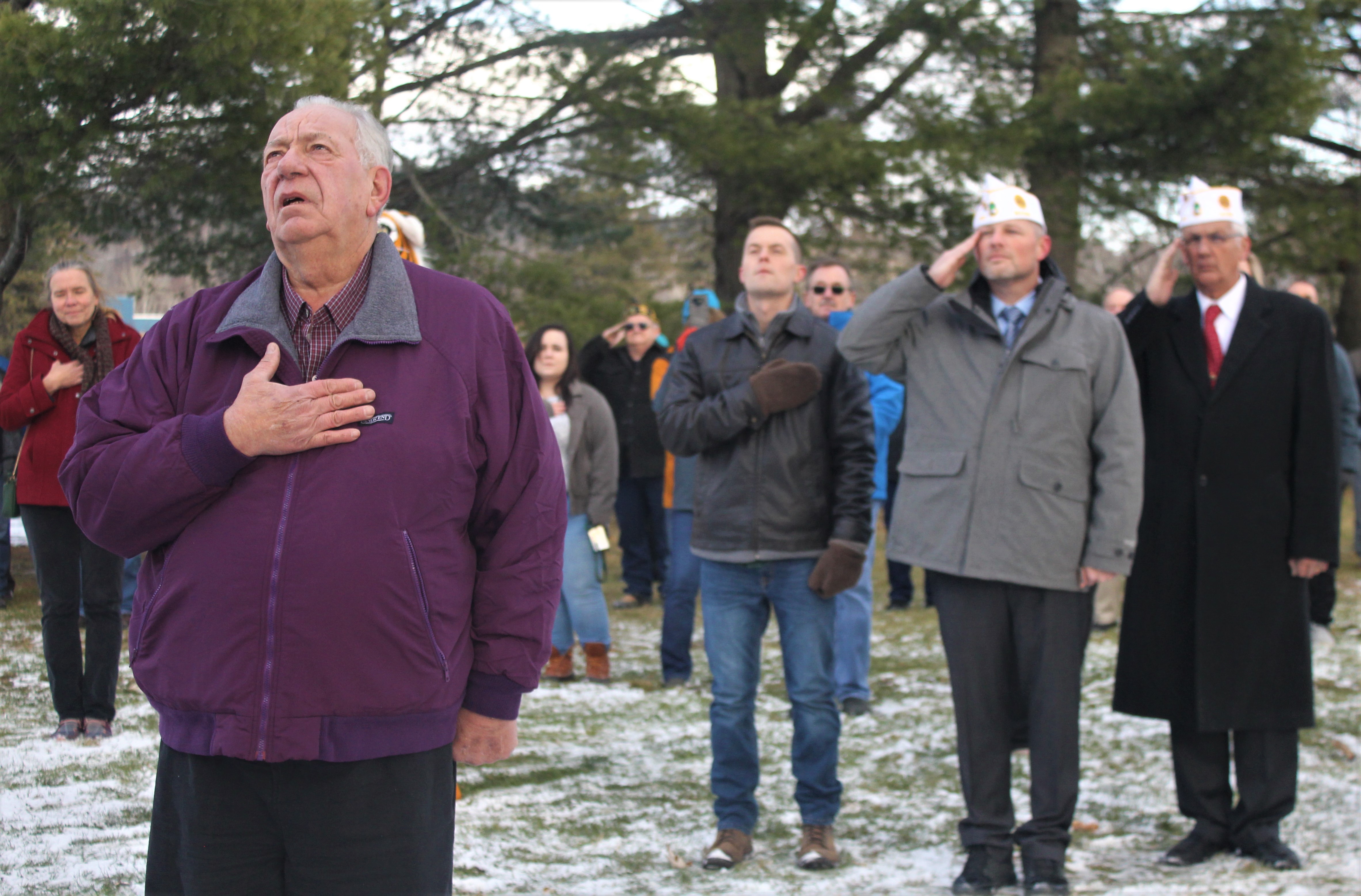 Vietnam Veteran Melford Pelletier of Wallagrass is clearly moved as an American Flag is raised at the University of Maine at Fort Kent on Saturday, Nov. 9.
(Jessica Potila)

“I am proud to have had members of my family who were so selfless,” she said.

“The war stories my dad shared were not pretty — the fear, the loneliness, the courage he and all that served have had to go through make you all heros in my eyes, but my dad will always be my No. 1 hero,” Paradis said. “I believe if he were here today he would sacrifice and give for his country again. Once you serve, you always serve.”

U.S. Rep. Jared Golden, D-Maine, himself a veteran who has served combat tours in Iraq and Afghanistan, expressed respect for members of Boy Scout Troop 189, helped raise a new American flag at the event.

Golden shared a memory of crossing a bridge near the Syrian border which he said his battalion marched following four days of fighting. He said he felt pride when he caught sight of an American Flag flying over the bridge.

“I think it’s important that we always instill that sense of pride and respect for our flag in all our citizens,” Golden said. 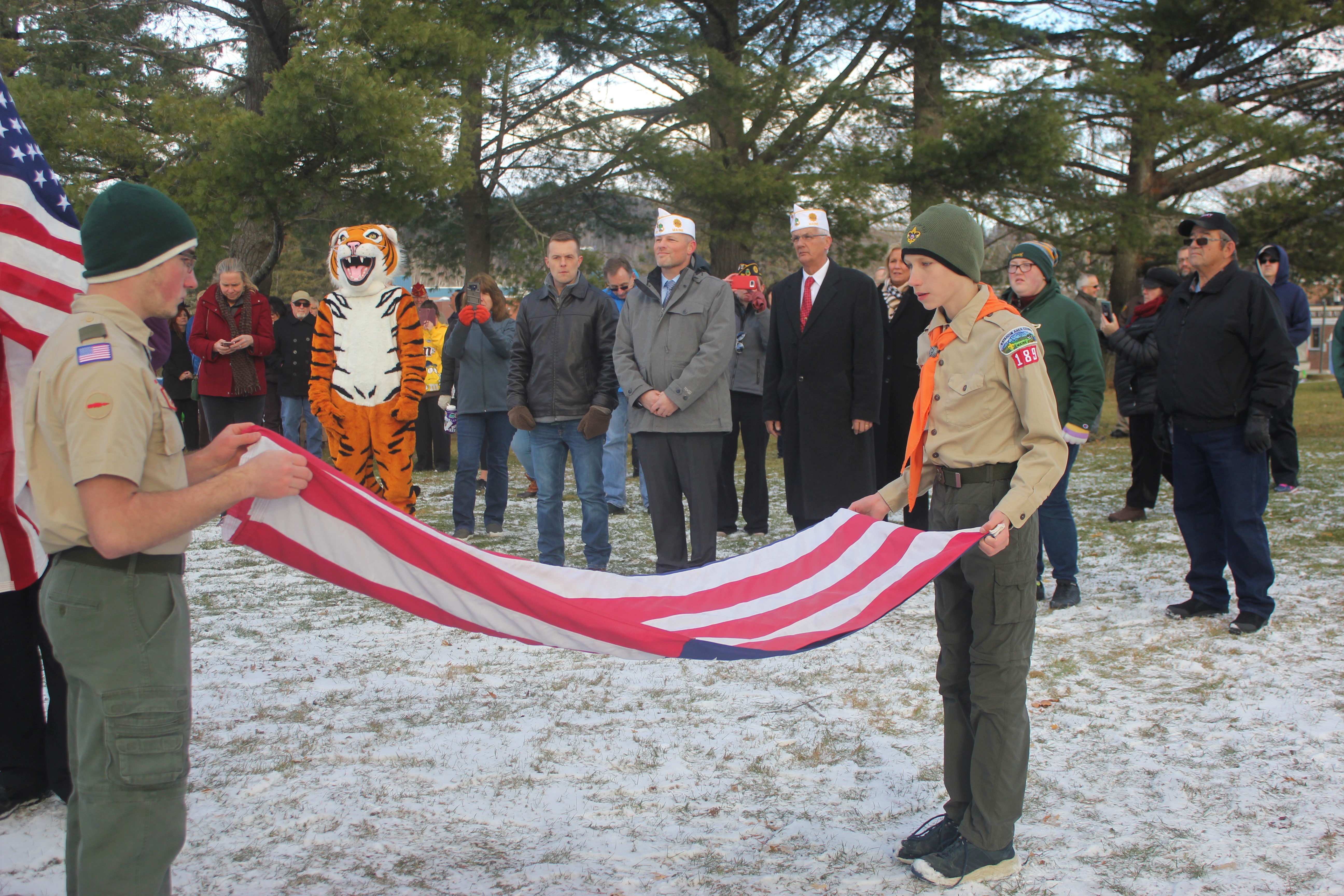 Members of Boy Scout Troop 189, Hudson Labbe (left) and Nick Griffeth, respectfully fold an American Flag as a new one is being raised at a Veterans Day ceremony at the University of Maine at Fort Kent on Saturday, Nov. 9.
(Jessica Potila)

Vietnam Veteran Melford Pelletier of Wallagrass read a letter from Maine Sen. Troy Jackson, in which Jackson said Maine is one of six states where veterans account for 10 percent of the population.

“Each one of them deserves our respect and recognition,” Jackson wrote.

“The main reason we decided to put on this event was to honor all of those Veterans who have sacrificed everything in life to make sure as Americans, that we have the freedoms and rights we do now,” McKenzie said. “It goes further than that though. Raising the American Flag is the ultimate tribute to our country’s greatest symbol. Many have paid the ultimate price protecting this symbol and everything it stands for. Today was a tribute and show of respect to both.”

Paradis expressed appreciation for McKenzie and everyone who participated in the flag raising ceremony.

“Thank you for taking the time to remember our heroes,” Paradis said. “They never gave up on us and we can’t give up on them.”

As the Maine Turnpike expects 1 million travelers alone over the Labor Day weekend, policymakers are gearing up for a sprint to solve one of the state’s most intractable problems: a long-standing — and growing — transportation funding gap.
Apex Weather END_OF_DOCUMENT_TOKEN_TO_BE_REPLACED

The Valley will receive an inch or less of accumulation from Thursday's system based on current forecast model data.
Our Sponsors END_OF_DOCUMENT_TOKEN_TO_BE_REPLACED