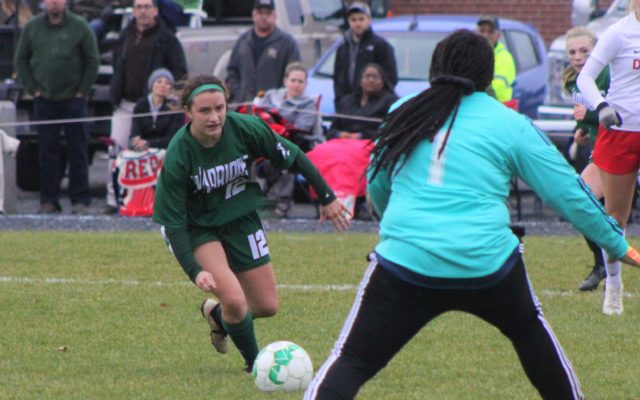 FORT KENT, Maine — The Fort Kent Community High School Warriors girls soccer team is just one game away from defending their state title as they head back to the Class C North Regional Championship following a semifinal win over Bucksport.

The Warriors defeated the Golden Bucks 6-1 in Fort Kent on Saturday.

Morgan Cyr and Gabby Martin each netted three goals for the Warriors offense. Cyr registered two assists and Martin, Kate Lamarre and Nancy Martin had one assist each.

“Our girls have been focused and have been playing as a true team,” Fort Kent head coach Doug Cyr said. “From our keeper to our strikers, they all understand their roles and that over the course of the game their roles change. They adjust and play soccer. Drilling the fundamentals of soccer with them all season has been key. For us to be successful in this next game, we need to be focused.”

Houlton is the only team to beat Fort Kent on the season this year. The Shires were victorious over Fort Kent in Houlton on Oct. 12, beating them 3-0. The Warriors beat Houlton 3-1 on Sept. 27 in Fort Kent.

Only one member of Maine’s congressional delegation had come out in favor of impeaching President Donald Trump ahead of House Speaker Nancy Pelosi’s Tuesday announcement that the Democratic-led House of Representatives would begin an impeachment inquiry.
Apex Weather END_OF_DOCUMENT_TOKEN_TO_BE_REPLACED

A strong upper-ridge anchored off the Southeastern US coast will bring warmer and more humid than normal conditions to the Valley through the late week period.
Campaign Corner END_OF_DOCUMENT_TOKEN_TO_BE_REPLACED

Dale Crafts filed his nomination papers for Feb. 21 with the Secretary of State to officially be placed on the primary ballot on June 9, 2020, for the U.S. House of Representatives 2nd District race.
Our Sponsors END_OF_DOCUMENT_TOKEN_TO_BE_REPLACED