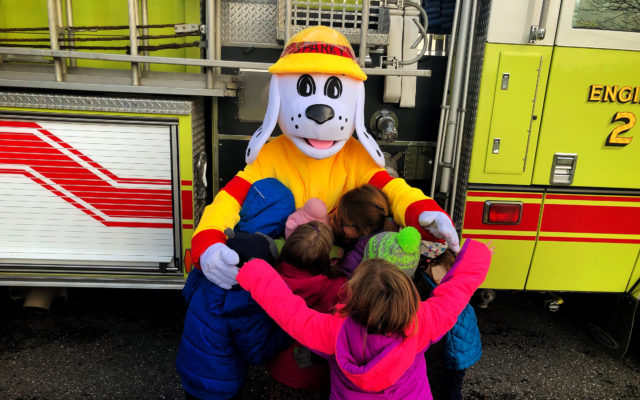 Morgan Mitchell • November 1, 2019
Students at the Madawaska Elementary School got a visit from a local firefighter and a special dog named Sparky to learn about fire prevention and safety on Wednesday, Oct. 30.

MADAWASKA, Maine — Students at the Madawaska Elementary School got a visit from a local firefighter and a special dog named Sparky to learn about fire prevention and safety on Wednesday, Oct. 30.

As the pre-kindergarten students in Kerry O’Brien’s class walked down the hall with anticipation, Sparky, a firefighter dressed as a canine humanoid, stood in the classroom waiting for the excitement.

Firefighter Kris Albert approached the Madawaska Fire Chief about getting a new Sparky suit after he found the previous one in a state of disarray. After the request was approved, the costume wasn’t supposed to arrive until mid-November. It came just in time.

When the children rounded the corner, smiles and giggles filled the room as some students made a beeline for Sparky to hug him.

Albert went over important lessons with the kids about fire safety and had them demonstrate some techniques like the stop, drop and roll.

“It’s very important because we have to teach the children fire safety rules like what to do if their clothes catch on fire and having a safety plan,” O’Brien said.

He also taught them about how to escape a structure on fire, when it is safe to open the door, and having a general fire escape plan.

“Parents often don’t think of having a fire escape plan and practicing that plan,” he said. “Schools practice fire drills on a regular basis which is great, but the reality is a fire could happen at home as well. We want children to know what to do in the case of an emergency while they are at home.”

Something else he taught the children was to never open the window when a structure is on fire because that would give it air and stoke the flames inside.

“One of the biggest things we try to instill in the children is to not hide[if] they can’t escape a fire,” Albert said. “We want them to make noise and draw attention to themselves and where they are.”

After he went over fire safety in the classroom, Albert put on his gear piece by piece to walk the children through how he gets dressed and that he’s not scary, he’s still “firefighter Kris.”

“Firefighters look different when we have our bunker gear on, but we are still your neighbors, friend’s parents, people you see at the grocery store … “ he said.

O’Brien said she was very thankful the firefighters came to visit her class.

The kindergarteners and homeschool students had the opportunity to tour the fire station earlier in October to celebrate fire prevention month.

“If we can save even just one life, it makes all the classes and extra work worth our while,” Albert said. “Besides that we have as much of a fun time with the kids as they do with us and we really look forward to this time of year every year.”

If anyone has any questions about fire safety/prevention, feel free to call the station at 728-6126 ext 3.

As the Maine Turnpike expects 1 million travelers alone over the Labor Day weekend, policymakers are gearing up for a sprint to solve one of the state’s most intractable problems: a long-standing — and growing — transportation funding gap.
Apex Weather END_OF_DOCUMENT_TOKEN_TO_BE_REPLACED

A cold front moved through the Valley early this morning, and it will be followed by an Arctic cold front this afternoon.
Campaign Corner END_OF_DOCUMENT_TOKEN_TO_BE_REPLACED