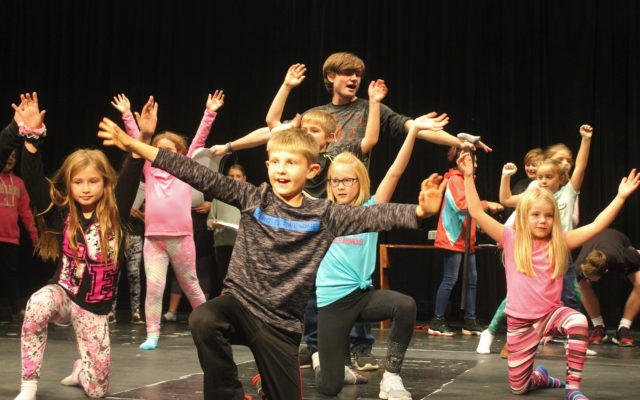 Local students to perform ‘Charlie and the Chocolate Factory’

Jessica Potila, SJVT / FhF Staff Writer • October 25, 2019
Theater-goers can purchase their golden tickets to musical performances of “Charlie and the Chocolate Factory,” which local students will perform next month in Fort Kent.

FORT KENT, Maine — Theater-goers can purchase their golden tickets to musical performances of “Charlie and the Chocolate Factory,” which local students will perform next month in Fort Kent.

With 26 children ranging in age from first grade to high school comprising the cast, the family friendly show promises to entertain audiences of all ages with singing, dancing and acting.

Fort Kent Community High School educator Doug Clapp, who in the past several years has directed sold-out performances of the musicals “Annie,” and “The Wizard of Oz,” is helming the production of “Charlie and the Chocolate Factory.”

Clapp enlisted public opinion to choose his latest musical, randomly asking people throughout town which show they would be interested in seeing before settling on the famous story of Willy Wonka.

“We floated three plays to the public, ‘Peter Pan,’ this one and ‘The Little Mermaid.’ The response was overwhelmingly in favor of (Charlie and the Chocolate Factory,)” Clapp said during a rehearsal on Monday.  “I even talked to someone yesterday, who said he sees the movie every year even as an adult.”.

As is always the case with one of Clapp’s musicals, there is plenty of community support in terms of production preparations.

Music teacher Samantha Boutot is conducting the show, Fort Kent Town Manager Suzie Paradis is choreographer and educator Jocelyn Saucier has stepped into the role of costume coordinator. Educator Samantha O’Clair is serving as secretary of the production.

“Our students are working very hard rehearsing lines and learning over 20 musical numbers,” Boutot said. “We’ve been rehearsing since the end of September. The amount of time and dedication being put into this show will prove for it to be a great audience pleaser with its twists, turns and magical wonders.”

One of the 13 young oompa loompas performing in the musical is Simone Guimond, a third-grader at Fort Kent Elementary School.

Guimond said she attended both “Wizard of Oz” and “Annie” as an audience member and was so impressed by what she saw that she decided to audition for “Charlie and the Chocolate Factory.”

“The actors were really good,” Guimond said.  “I wanted to try it.”

Guimond said she is enjoying rehearsals of the musical and her favorite part of the show is “when Violet turns into a blueberry.”

Simone Guimond, who wants to be an artist when she grows up, is the daughter of Jacob and Margaret Guimond of Fort Kent.

Paradis said she is “having a wonderful time working with the students.”

“I encourage every age group to attend this play. ‘Charlie and the Chocolate Factory’ is timeless; what is not to love about the storyline?,” she said.  “Please buy your tickets and attend.”

The students will perform “Charlie and the Chocolate Factory” at 7 p.m. Thursday through Saturday, Nov. 21-23 and an additional matinee at 2 p.m.Saturday, Nov. 23, at  University of Maine at Fort Kent Fox Auditorium.

Ticket prices are $10 for adults and $5 for students and can be purchased at Fort Kent Community High School or at the door.

Only one member of Maine’s congressional delegation had come out in favor of impeaching President Donald Trump ahead of House Speaker Nancy Pelosi’s Tuesday announcement that the Democratic-led House of Representatives would begin an impeachment inquiry.
Apex Weather END_OF_DOCUMENT_TOKEN_TO_BE_REPLACED

High pressure will bring mostly clear to partly cloudy skies to northern Maine today and tonight as low-pressure slides east of the region in the southern part of the state.
Campaign Corner END_OF_DOCUMENT_TOKEN_TO_BE_REPLACED

Dale Crafts filed his nomination papers for Feb. 21 with the Secretary of State to officially be placed on the primary ballot on June 9, 2020, for the U.S. House of Representatives 2nd District race.
Our Sponsors END_OF_DOCUMENT_TOKEN_TO_BE_REPLACED