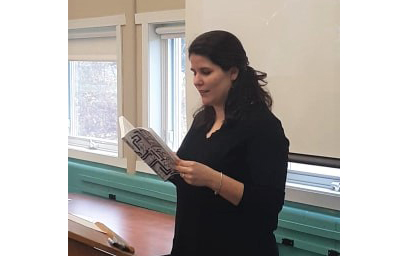 ‘Maine grows writers,’ and Emma G. Rose is happy to be one of them

Jessica Potila, SJVT / FhF Staff Writer • October 22, 2019
From the time she was a child growing up on her parents’ “truck farm” in Newport, Emma G. Rose knew she wanted to become a writer.

FORT KENT, Maine — From the time she was a child growing up on her parents’ “truck farm” in Newport, Emma G. Rose knew she wanted to become a writer.

Rose and her younger brother Noah lived in the countryside where their parents, Ron and Susan Potvin, raised pigs and chickens and sold flowers grown in their own greenhouses.

“I had many opportunities to exercise my imagination. I didn’t have neighbors. I worked out on the farm; there’s a lot of repetitive work that you do that gives your mind time to wander, and so I think Maine grows writers,” Rose said. “We spend a lot of time outside and spend a lot of time doing that close-to-the-earth work that lets your mind have time to think through other things.”

Rose studied journalism at the University of Maine and accepted an internship at the Bangor Daily News, but quickly discovered this type of writing was not for her.

“On Christmas Eve I was the intern on duty and I got to work and the journalist on duty said, ‘I hope you brought boots today,’ and I asked why and she said, ‘Because we’re going to stand by the river and wait for them to pull a body out of the water,” Rose said.

“And I said, ‘Well, that’s fun,’ and I went and I did not enjoy it, and so I decided on that day that I didn’t want to be a journalist and I was going to do something else with my writing ability.”

After a significant amount of freelance writing, which she still continues, Rose completed her first novel, “Nothing’s Ever Lost,” which she self-published through the company she founded, Imperative Press.

Although the book is classified as young adult fiction, it crosses several categories from science fiction to contemporary.

“This is a really strange story. It doesn’t fit into a clean niche,” she said.

She summarized “Nothing’s Ever Lost” as a book about “two teenagers trying to hold their friendship together while they travel through the afterlife.”

The story was inspired by the death of Rose’s teenaged cousin, Nicholas Wayne Fernandes, by suicide in 2008.

“His death was a hard thing for the family. My way to deal with it was to write about it,” Rose said. She added that the pages of her book allowed her “a place to put my cousin, a place where he was okay.”

If Maine grows writers, it also grows close-knit families. Susan Potvin is her daughter’s manager and travels with her to book signings, which thus far have taken them to Vermont, Florida and even a bookstore in Oklahoma, Magic City Books, that has previously hosted authors such as Salman Rushdie, Busy Phillips and, just this month, Rachel Maddow.

“My mom has always been incredibly supportive of my writing,” Rose said. “She’s the only one who cares about my success as much as I do, like probably in the whole world, so she is just as excited about this and honestly has sold more books than I have. I think everyone she talks to it’s like, ‘Have you read my daughter’s book?’ then she tells them about it and they buy it. She’s really my best cheerleader.”

“I’m obviously very proud,” Potvin said. “I’m proud of both of my kids and their accomplishments. They’re good people and followed their dreams and are taking responsibility.”

This weekend, Rose and her mother attended a book signing and read portions of Nothing’s Ever Lost at the small, independently owned Bogan Books in Fort Kent. While in town she spoke to students in the library at Fort Kent Community High School.

Educator Donald Chouinard said a group of students in his freshman English class at the high school have selected “Nothing’s Ever Lost” as one of six elective books they must read to complete their class requirements.

“I’m always looking for more schools who want me to come in. I love talking to the kids,” Rose said. “I tell teachers …that if I’d had an author come into my classroom when I was a teenager and say, ‘You can be a writer, you can be published and you can support yourself doing this,’ it would have changed my life, and I want to do this for these kids.”

“Nothing’s Ever Lost” is available online at Amazon.com, BarnesandNoble.com. and Booksamillion.com

Maine’s longest serving legislator, Martin was first elected to the Maine House of Representatives in 1964 when he was 23.
Our Sponsors END_OF_DOCUMENT_TOKEN_TO_BE_REPLACED