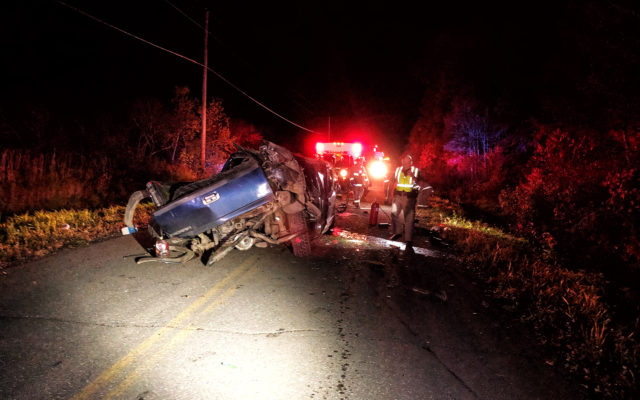 Morgan Mitchell • October 15, 2019
The Madawaska Police Department’s search for a possible drunk driver ended in a roll-over crash Friday night after police searched for the driver for nearly two hours.

MADAWASKA, Maine — The Madawaska Police Department’s search for a possible drunk driver ended in a roll-over crash Friday night after police searched for the driver for nearly two hours.

Madawaska police got a 911 call at 6:37 p.m. from a female who said that 30-year-old Jordyn Cote was intoxicated and was refusing to let her and her 7-year-old son out of his vehicle driving on Lake Shore Road.

En route, police received word that the passengers were let out at a residence on Lake Shore Road.

Police looked for Cote in the surrounding areas for nearly two hours before they decided to head back to town via Beaulieu and Gagnon roads. As Officer Garrett Albert was heading back to town on Gagnon Road, he came upon Cote driving in the wrong lane, which almost caused a head-on collision.

After Albert drove off the road to avoid the accident, he turned his car around to chase Cote’s vehicle. Less than two minutes from that encounter, Albert arrived at the crash scene where Cote had been ejected from his vehicle.

The Madawaska Ambulance Department arrived on the scene shortly after to treat Cote for his injuries. He was taken to and treated at the hospital in Fort Kent before he was transported by helicopter to Portland with serious but not life-threatening injuries.

Police said charges are pending completion of the investigation.

A warm front will approach the Valley today and cross the region this evening.
Campaign Corner END_OF_DOCUMENT_TOKEN_TO_BE_REPLACED

Dale Crafts filed his nomination papers for Feb. 21 with the Secretary of State to officially be placed on the primary ballot on June 9, 2020, for the U.S. House of Representatives 2nd District race.
Our Sponsors END_OF_DOCUMENT_TOKEN_TO_BE_REPLACED