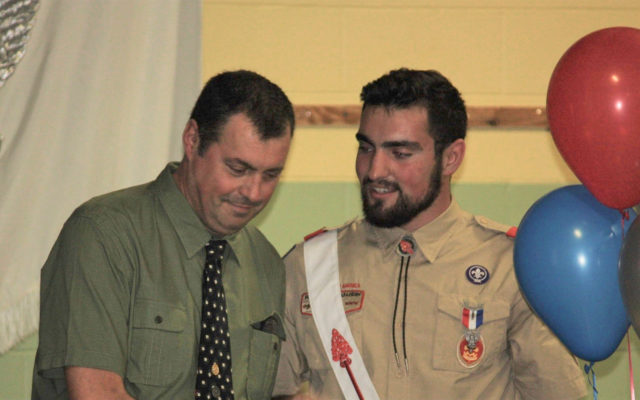 EAGLE LAKE, Maine — An Eagle Lake teen recently received a certificate of recognition for achieving the rank of Eagle Scout.

Jordan Labbe, 18, was recognized for earning his Eagle Scout rank at a celebration at Fort Kent Community High School in late September.

For his Eagle Scout project, Labbe built a snack shack for the school’s booster club which they use to sell food and refreshments at home soccer games to raise funds for local middle school and high school athletics.

Labbe has been a member of Fort Kent Boy Scout Troop 189 since he was 10 years old, according to his mother, Michelle Labbe, and has hoped to become an Eagle Scout since that time.

“That was the idea.” Michelle Labbe said. “We really encouraged him that if we were going to commit to scouts, we would see it through.”

Michelle Labbe said her son could not have achieved this goal without the support of the local scouting community.

“It takes a troop to raise an Eagle Scout — the labor of all the volunteers, the other parents that pitch in and help. And not that the moms aren’t important …  but the men of the community do a great job with helping — all the merit badge counselors we have in this community. They just do an amazing job. This is a very supportive community for the scouts here and that’s special,” she said. “We have a very good troop up here that does a fantastic job mentoring these young men.”

Michelle Labbe and her husband Glenn Labbe, Jordan’s father, are also the parents of 16-year-old Hudson Labbe, who is coming up in the ranks and hopes to become an Eagle Scout in the next year and a half.

Jordan Labbe is currently attending the University of Maine at Fort Kent where he is studying criminal justice and rural public safety.

The 500-millibar upper-level trough associated with the cold front and low pressure that brought last evening's thunderstorms will slowly move over the Valley today and Thursday with a chance for scattered showers and an isolated thunderstorm or two across the Valley this afternoon.
Our Sponsors END_OF_DOCUMENT_TOKEN_TO_BE_REPLACED