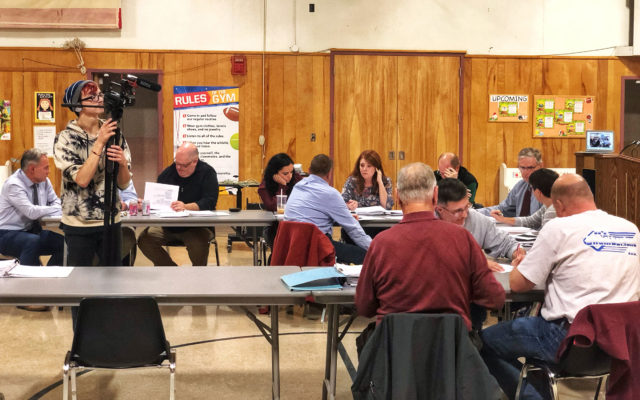 Site selection matrix gets a makeover from committee

Morgan Mitchell • October 11, 2019
The Valley Unified Site Selection Committee revamped the matrix used to help determine a site for the proposed regional high school at its Oct. 8 meeting at Dr. Levesque Elementary School during a workshop.

FRENCHVILLE, Maine —  The Valley Unified Site Selection Committee revamped the matrix used to help determine a site for the proposed regional high school at its Oct. 8 meeting at Dr. Levesque Elementary School during a workshop .

Administrators and school board members from Madawaska School Department and SADs 27 and 33 in the Fort Kent and Frenchville areas have been working together for about three years to combine resources and save money in an effort to address declining enrollments and rising costs in education.

The committee meeting began with an abnormally low turnout with 11 of the 17 members in attendance. The committee broke off into small groups after committee member Lester Ouellette moved to eliminate the matrix and only focus on size and location of the school. The motion died without a second from any committee member.

The matrix is used like a grading rubric to assess the proposed sites. The committee had planned to revamp the matrix in July, but the matter was tabled. As the sites are narrowed down to two — one near the St. John Valley Tech Center and the other in Fort Kent near Kent Firewood, the committee broke off into small assigned groups to consider each item in the matrix assigned to that group.

At the conclusion of the small group discussions, each group presented recommendations for their assigned matrix items. Out of the 26 items, 12 remained the same, nine were adjusted, and five were removed.

Other adjustments included the elimination of parts of each item such as removing a portion of the adjacent land use item, which removed three parts including the criteria to be adjacent to civic uses such as police, fire, library or post office. The committee agreed on that specific elimination because it was redundant to items 5, 6, 7 and 8 — sections reserved for fire, police, ambulance, and library/daycare/other services, which were not changed in any way following presentations from surrounding emergency departments.

The Department of Education funds transportation for the schools based on the mileage the buses travel backdated by two years. The argument for changing it from weighted travel time to distance included the possibility of snow storms, traffic and other factors not in the control of the driver, that could skew the weighted travel time estimate. The engineer firm, WBRC, said it would come up with another matrix item to make up for travel time.

The committee was also scheduled to hear from the transportation director of Valley Unified, however the meeting ran almost 30 minutes over just with the committee’s reworking of the matrix.

As the Maine Turnpike expects 1 million travelers alone over the Labor Day weekend, policymakers are gearing up for a sprint to solve one of the state’s most intractable problems: a long-standing — and growing — transportation funding gap.
Apex Weather END_OF_DOCUMENT_TOKEN_TO_BE_REPLACED

A cold front moved through the Valley early this morning, and it will be followed by an Arctic cold front this afternoon.
Campaign Corner END_OF_DOCUMENT_TOKEN_TO_BE_REPLACED