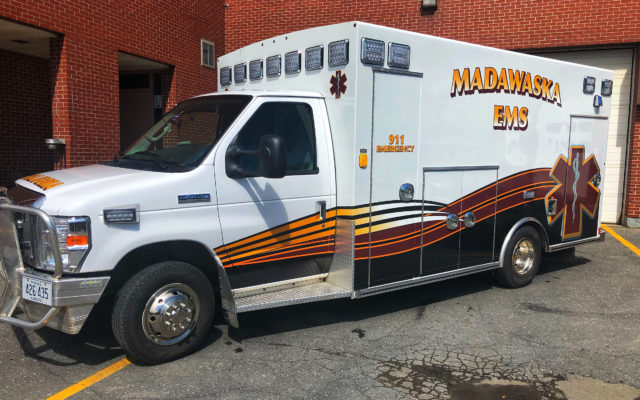 How a house number can save your life

Morgan Mitchell • October 7, 2019
Imagine one snowy evening you are heading to dinner at a new friend’s house -- a house you’ve never visited before. It is getting darker and your GPS has you on the right street, but you cannot find the house number.

MADAWASKA, Maine — Imagine one snowy evening you are heading to dinner at a new friend’s house — a house you’ve never visited before. It is getting darker and your GPS has you on the right street, but you cannot find the house number. In fact, you can’t see any house numbers. You call them and there is little signal and the call drops. After driving down the same street for several minutes, you decide to cut your losses and try again another day.

Now, imagine you are an ambulance driver. There is no such thing as cutting losses and trying again another day.

Michael Dumond, a paramedic with the Madawaska Ambulance Service, started working as a paramedic 32 years ago and has thought about house numbers since he started his career.

“One of my biggest fears is that we will never find the house,” Dumond said.

Each ambulance is equipped with a GPS, but Dumond said that even though the technology will get you in the neighborhood, it could be three houses off.

“We’re blessed around here because we know people, so we can call them back to double check the address if that house number doesn’t exist,” said Jessica Page with the Madawaska Ambulance Service.

Page said that even with the veteran EMS personnel, and a majority of new hires originating from the area, the ambulance service still relies heavily on house numbers, especially if a traveling paramedic or trainee is on board the ambulance.

When it comes to mailboxes and house numbers posted on them, often times the numbers will only be on one side of the mailbox for the mailman, requiring the driver of the ambulance to look back to read the numbers on the mailboxes, sometimes in the dark.

“They think it is just for the post office, but you need it for emergency services  — that’s the real reason,” Page said.

As winter approaches, the paramedics said snow covers some of the mailboxes making those hard to see so they have to look hard at the houses for numbers.

Some people don’t even put house numbers on their houses because they have a post office box, according to Dumond, who added that problem often happens with residences that are far back from the road.

Page said there is also a huge issue at the lake with people not knowing their addresses or the difference between their lot number and their house number.

“They don’t always know what their house number is, but they might know their lot number, or they might not know either of them,” she said.

They recommend posting your house numbers near the road, on both sides of the mailbox and also on the house where the driveway meets the corner of the home, and in large numbers that can be visible from the street.

“If you don’t have a mailbox, put a plaque on a pole,” Dumond said.

As far as the lit house numbers … “We love you guys,” Page said. “You are our favorite people.”

“Even if we’re not going there, just the fact that it is there, we have an idea of where we are,” Dumond said.

The next best thing would be to make the house numbers reflective on the post or mailbox, according to Page. Dumond added that if all else fails, to leave your vehicle in front of your house with the lights flashing.

Essentially, by displaying a visible house number, you are not only prepared in case you need help, but you could also help save a neighbor.

Maine is more than eight months into Medicaid expansion under the federal Affordable Care Act and trends around who is enrolling and where they live are starting to emerge, bucking some expectations and pointing out access challenges.
Apex Weather END_OF_DOCUMENT_TOKEN_TO_BE_REPLACED

Low pressure will track into the Atlantic from off the Southeast coast tonight into Thursday with increased cloudiness this evening into the overnight hours.
Campaign Corner END_OF_DOCUMENT_TOKEN_TO_BE_REPLACED

Democratic presidential candidate Mike Bloomberg’s campaign will host 25 events in Maine this Saturday and Sunday as part of a nationwide “Weekend of Action” to engage supporters and build on the momentum of the campaign.
Our Sponsors END_OF_DOCUMENT_TOKEN_TO_BE_REPLACED