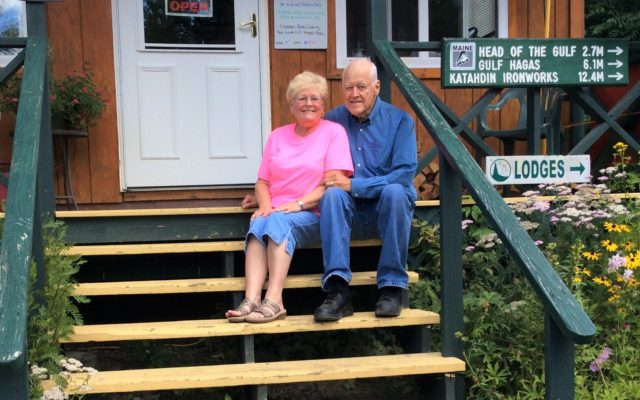 Jessica Potila, SJVT / FhF Staff Writer • October 7, 2019
After chemotherapy and a stem cell transplant proved unsuccessful in treating his diagnosis of large B-cell non-Hodgkin lymphoma, Jerry Jalbert, 73, of Fort Kent thought doctors had run out of options to help him.

FORT KENT, Maine — After chemotherapy and a stem cell transplant proved unsuccessful in treating his diagnosis of large B-cell non-Hodgkin lymphoma, Jerry Jalbert, 73, of Fort Kent thought doctors had run out of options to help him.

Just days before Jalbert relapsed and as doctors were prepared to put him on palliative care, the Food and Drug Administration approved a new treatment, CAR T-cell therapy, to fight his aggressive form of cancer.

Jerry and his wife of 48 years, Ethel Jalbert happened to have their television tuned in to a Bangor area news program when the newscaster announced that an upcoming segment would discuss a man around Jerry’s age who had beaten non-Hodgkin lymphoma with CAR T-cell treatment while the treatment was still in the experimental stage.

The Jalbert’s eagerly awaited the news segment during which they witnessed footage of the cancer survivor mowing his lawn and discussing an upcoming ski trip with his grandchildren.

This sounded good to Ethel and Jerry, who had three children and five grandchildren of their own.

“Until recently, the use of CAR T-cell therapy has been restricted to small clinical trials, largely in patients with advanced blood cancers. But these treatments have nevertheless captured the attention of researchers and the public alike because of the remarkable responses they have produced in some patients — both children and adults — for whom all other treatments had stopped working,” according to the National Cancer Institute.

It is the same treatment young Kearston Albert of Fort Kent underwent to successfully treat her diagnosis of acute lymphoblastic leukemia. Doctors diagnosed Albert with cancer when she was just 3 years old. Like Jerry Jalbert, Kearston underwent traditional treatments to fight her cancer for years, including chemotherapy and a bone marrow transplant, but experienced multiple relapses. When all hope seemed lost, she entered into a clinical trial for CAR T-cell therapy and is now in remission.

After watching the news segment, the Jalberts contacted their doctor at Northern Maine Medical Center who reached out to an oncologist at Dana-Farber/Brigham and Women’s Cancer Center to discuss the possibility of CAR T-cell therapy.

Once the Jalberts realized CAR T-cell therapy was an option, they naturally had questions.

An 18-page contract Jerry would need to sign in order to undergo the newly approved treatment contained a list of many potential side effects, and there was no guarantee that this new treatment would be successful in treating his cancer.

“I never wanted to ask. ‘how much time does he have’ — this was his question to ask if he wanted to know,” said Ethel Jalbert, who is a registered nurse. “I did ask, ‘what can we expect the progression of the illness to be?’.”

Doctors informed Ethel that it was possible the treatment would extend Jerry’s life only by a month or two, or maybe up to a year.

“I asked myself, ‘why put him through that?,” Ethel said.

“We decided that if we were one of the fortunate ones with a good outcome we were certainly going to be grateful and if not, hopefully we would advance the medical knowledge that might help save a young mother or father or allow a young person to be able to know their life more fully; some good would have come from it,” she added.

Although there were many bumps along the way, including Jerry temporarily losing his memory, within one month of completing the CAR T-cell therapy, his cancer was in remission.

Ethel pointed out that her family received community support from the Edgar J. Paradis Cancer Fund, which provided some financial support, as well as Patient AirLift Services (PALS), which provided transportation for Jerry throughout his cancer treatments.

“That relieved a lot of the burden,” Ethel said. ”People have asked me, ‘if I participate in a run or other fundraiser (to support the Edgar J. Paradis Cancer Fund or PALS), does that money really help cancer patients,’ and I say ‘yes it does and we’re living proof.’”

Since his remission due to CAR T-cell therapy 18 months ago, Jerry and Ethel have not been on any ski trips like the gentleman they learned about in the news broadcast, but they have been able to attend their son Andrew’s wedding and also welcomed their first great-grandchild.

The couple also have taken on a new adventure together as gatekeepers to the North Maine Woods in Greenville where they enjoy relaxing together in nature and meeting people from all over the world who come to hike the Appalachian Trail.

Now Jerry and Ethel want to spread the word about this treatment option in hopes of helping others.

Ethel also pointed out her belief that people need to advocate for themselves when it comes to medical treatment and also that patients should consider having someone attend medical appointments with them. She and Jerry both also praised doctors at NMMC and Dana Farber for working together throughout Jerry’s treatment.

“Just because we live in a rural area does not mean we are unable to access the best care possible, because our physicians here will connect with physicians in other areas,” she said.

“In addition to all the medical care I have received we appreciate all the prayers and well wishes we’ve been getting; it has been phenomenal,” Jerry added.

Ethel also provided a strong message of hope for others facing a cancer diagnosis who are struggling to endure a litany of cancer treatments as Jerry has.

“There was a time when I asked myself, ‘why put him through that,’ but now I think that if Jerry never had his first chemotherapy, he would not have lived to have stem cell treatment, and if he had not had stem cell treatment he would not have lived to have CAR T-cell. If there’s a message in this, it’s that you never know what tomorrow brings; don’t give up hope,” Ethel said.

Maine is more than eight months into Medicaid expansion under the federal Affordable Care Act and trends around who is enrolling and where they live are starting to emerge, bucking some expectations and pointing out access challenges.
Apex Weather END_OF_DOCUMENT_TOKEN_TO_BE_REPLACED

Low pressure will track into the Atlantic from off the Southeast coast tonight into Thursday with increased cloudiness this evening into the overnight hours.
Campaign Corner END_OF_DOCUMENT_TOKEN_TO_BE_REPLACED

Democratic presidential candidate Mike Bloomberg’s campaign will host 25 events in Maine this Saturday and Sunday as part of a nationwide “Weekend of Action” to engage supporters and build on the momentum of the campaign.
Our Sponsors END_OF_DOCUMENT_TOKEN_TO_BE_REPLACED