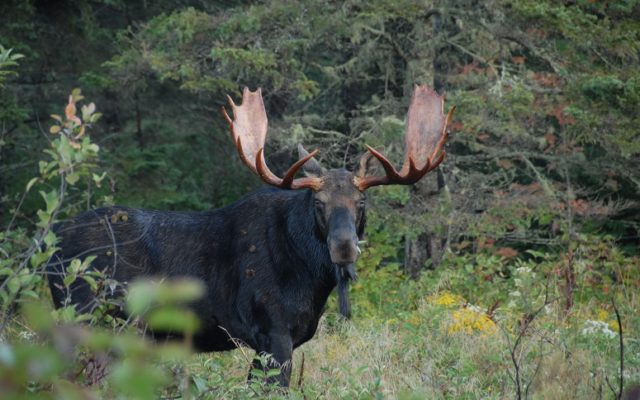 Upping your game with moose calling

Matthew LaRoche, Special to the Fiddlehead Focus • October 4, 2019
Calling in a big bull moose during the rut is one of the most thrilling things I have ever done. When you get that answering grunt from your cow-in-heat call you know you’re in for some excitement.

Calling in a big bull moose during the rut is one of the most thrilling things I have ever done. When you get that answering grunt from your cow-in-heat call you know you’re in for some excitement. The bull will usually rake his antlers on some bushes and make a commotion to let you know that he is the dominant moose in the area.

If you are calling moose for another hunter, you get the same adrenalin rush that you get as the hunter. When you have fooled that bull into thinking you are a receptive female and he is coming in for a closer look, it truly is exciting. Sometimes a bull will come running out after just a few cow calls — usually a young bull. Other times a bull will have to be coaxed out into the open. This is when you need to persuade the moose that there is a smaller bull trying to woo a cow moose from right under his nose. To do this you will need to use a grunt call and/or rake the bushes with a moose antler or the scapular bone. If you do it right, the moose will not be able to resist and he will come in for a closer look.

There are a few things to consider when choosing your location to call. Is there good moose sign nearby (tracks and bushes that have been raked by antlers)? Pick a spot that is open enough for a good shot and set up on the upwind side of the opening, because the moose will usually approach from downwind. Moose have an extremely good sense of smell, so they will want to use the wind to their advantage.

Some tools of the trade that will increase your chances of success are: some type of megaphone (if you are a traditionalist you would make it out of birch bark, but you can use anything that will help cast the call a greater distance), an antler or scapular bone off a moose for raking the bushes, and some moose urine to spray around when that moose is approaching from downwind.

One of the best moose callers I know is Trevor O’Leary, the Allagash Ranger at Michaud Farm. He does some guiding on his time off for one of the guide services in the town of Allagash. Trevor is very good at calling moose. If there is a bull moose within hearing range, he is going to come in when Trevor starts calling. Trevor shot some exceptional video of a hunt he guided last fall — he had two moose coming to his call. His client had to turn around because the second moose was coming in fast from behind said hunter. His client harvested the moose at point blank range with one shot.

A couple years ago, I planned to meet Trevor at Henderson Brook Bridge on the Allagash. It was late September and the rut was just starting. He had gotten to the bridge before me and started calling moose just to see what would happen. When I got there, you could just barely hear a bull moose grunting off in the distance. Within 10 minutes there was a young bull walking up the river, grunting every few minutes. He came within 50 yards of the bridge before he figured out something was wrong and took off.

I found a great YouTube moose calling video online called, “Moose Calling with Spencer.” He does an excellent job of describing the various calls, when to use them and how to setup the ideal ambush. The link to the video is www.youtube.com/watch?v=4uPXHggbCTY.

Moose calling is a skill that needs to be developed with practice and tried in the field on real moose. It is fun and very satisfying to have a giant bull moose come to your call.

I was on an Allagash canoe trip with some friends a couple of years ago on Long Lake. We spotted a bull moose across the lake one evening. My buddy and I started calling, and within a few minutes that young bull was swimming across the lake to meet the lovely sounding cow on the other side of the waterway.

A fall canoe trip down the Allagash Wilderness Waterway (AWW) combined with calling moose would be an awesome adventure. As of Oct. 1, the waterway is open to general hunting with restrictions near campsites, trails and other developed areas. See AWW rules at: www.maine.gov/allagash for a complete list of waterway rules.

Matthew LaRoche is superintendent of the Allagash Wilderness Waterway. The waterway is managed by the Department of Agriculture, Conservation and Forestry’s Bureau of Parks and Lands.  For information go to: www.maine.gov/allagash or call (207) 941-4014 for an information packet.

Only one member of Maine’s congressional delegation had come out in favor of impeaching President Donald Trump ahead of House Speaker Nancy Pelosi’s Tuesday announcement that the Democratic-led House of Representatives would begin an impeachment inquiry.
Apex Weather END_OF_DOCUMENT_TOKEN_TO_BE_REPLACED

A strong upper-ridge anchored off the Southeastern US coast will bring warmer and more humid than normal conditions to the Valley through the late week period.
Campaign Corner END_OF_DOCUMENT_TOKEN_TO_BE_REPLACED

Dale Crafts filed his nomination papers for Feb. 21 with the Secretary of State to officially be placed on the primary ballot on June 9, 2020, for the U.S. House of Representatives 2nd District race.
Our Sponsors END_OF_DOCUMENT_TOKEN_TO_BE_REPLACED