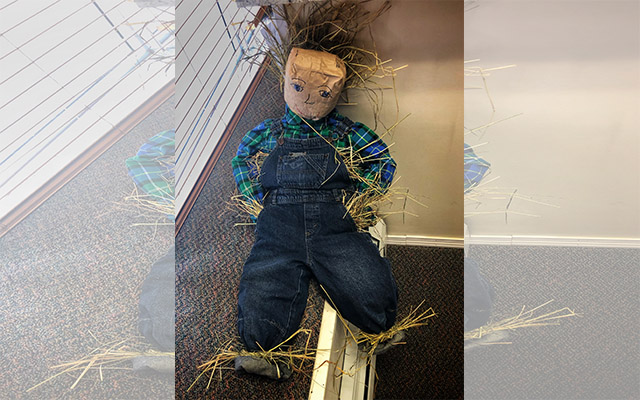 How to make a small scarecrow

Morgan Mitchell • October 3, 2019
As fall spreads deeper throughout the Valley and the leaves change to their peak fall colors, more and more decorations celebrating the season have emerged -- including the ever-popular scarecrows.

MADAWASKA, Maine — As fall spreads deeper throughout the Valley and the leaves change to their peak fall colors, more and more decorations celebrating the season have emerged — including the ever-popular scarecrows.

Being from Texas, specifically Houston, I never saw a whole lot of color changing in the leaves as the seasons changed. Needless to say, I was ecstatic when I saw a patch of orange amongst a tree of green both last year and this year. Last year, I made a fall wreath to welcome a new, exciting side of fall that we just never experienced in my native state.

This year, I decided to take a stab at scarecrows just in time for the Scarecrow Festival.

I needed a pair of jeans, a flannel shirt, some stuffing, and some hay for accents.

After I sent out to Facebook that I was looking for children’s clothes for a project, one of my friends immediately came to the rescue. To make it that much better, the jeans I was getting weren’t just pants — they were overalls.

To me, nothing says scarecrows and fall more than flannel and overalls.

I laid out the clothes and grabbed some stuffing I had laying around from a previous project. I cut the fluff to match the sizes of the legs and arms and stuffed those after stuffing the body with whatever was left. I did, however, save just a big enough ball for the head.

After I had the body and extremities stuffed, I took small rubber bands and banded the ends of the legs and arms to secure the fluff from escaping.

I had to wrack my brain to figure out what to do for the head. After toying with the idea of using a smallish pumpkin for the head, I resorted to using the fluff I had set aside in a brown paper bag. I was able to draw a cute and basic little face upside down on the paper and stuffed the top section of the bag into the neck of the shirt so the fluff wasn’t exposed.

As I completed the body of the scarecrow, I realized I really needed hay to make it pop. So, I took to Facebook again looking for hay to accent the scarecrow. Within a few hours, another friend let me know that they had some to spare.

The hay really made it special. I recalled the scarecrow from the Wizard of Oz, a part my father dressed as year after year when my family went trick-or-treating as the gang from Oz with me as Dorothy as always, my mom as the Cowardly Lion, and my sister as the Tin Man.

In the movie, the scarecrow is always stuffing himself back up after more and more hay escapes his clothes. So I decided I was going to stuff that thing with hay until it was coming out of the scarecrow’s ears.

And that was all.

Probably the best thing about this project is that I was able to do the entire thing for free thanks to a couple of good friends. Now Skippy the Scarecrow sits in the office of the St. John Valley Times watching out for us, waiting for the day he gets to fulfill his destiny and scare some crows.

Only one member of Maine’s congressional delegation had come out in favor of impeaching President Donald Trump ahead of House Speaker Nancy Pelosi’s Tuesday announcement that the Democratic-led House of Representatives would begin an impeachment inquiry.
Apex Weather END_OF_DOCUMENT_TOKEN_TO_BE_REPLACED

Dale Crafts filed his nomination papers for Feb. 21 with the Secretary of State to officially be placed on the primary ballot on June 9, 2020, for the U.S. House of Representatives 2nd District race.
Our Sponsors END_OF_DOCUMENT_TOKEN_TO_BE_REPLACED