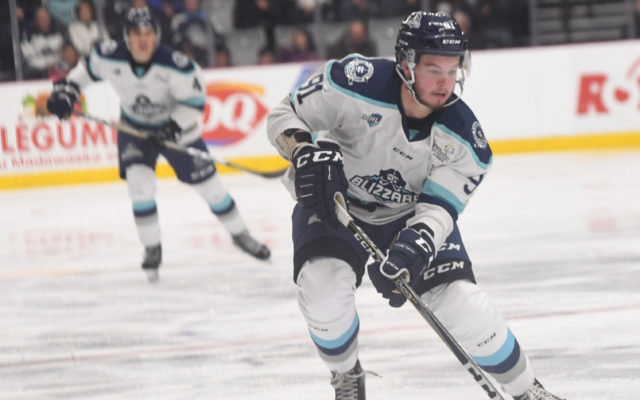 Contributed • October 1, 2019
The Edmundston Blizzard made a good start to its first trip on Nova Scotia’s ground this season.

EDMUNDSTON, New Brunswick — The Edmundston Blizzard made a good start to its first trip on Nova Scotia’s ground this season by defeating the Valley Wildcats 5-1 in a Maritime Junior A Hockey League game in front of 501 fans in Berwick on Sept. 27.

Linemates Isaac Chapman (2g), Brock McLeod (1g, 1a) and Tristan Gagnon (2a) ended the night with two points each.

Félix Rioux and Chrystopher Collin scored their first goal of the campaign to put the final touch to this game allowing the Blizzard (4w, 1l) to join the Summerside Western Capitals in first place of the Eastlink North Division.

Cole Kirkup is the only Wildcat who managed to beat goalkeeper Antoine Lyonnais who was great by pushing 25 pucks back. His rival Chad Arsenault faced 32 shots from the Blizzard.

Edmundston rooke Dylan Lang enjoyed his first point in the junior category with a helper on the Blizzard’s first goal by Rioux in the first period. Edmundston led 2-1 after 20 minutes and 3-1 after two periods.

Maine is more than eight months into Medicaid expansion under the federal Affordable Care Act and trends around who is enrolling and where they live are starting to emerge, bucking some expectations and pointing out access challenges.
Apex Weather END_OF_DOCUMENT_TOKEN_TO_BE_REPLACED

Low pressure will track into the Atlantic from off the Southeast coast tonight into Thursday with increased cloudiness this evening into the overnight hours.
Campaign Corner END_OF_DOCUMENT_TOKEN_TO_BE_REPLACED

Democratic presidential candidate Mike Bloomberg’s campaign will host 25 events in Maine this Saturday and Sunday as part of a nationwide “Weekend of Action” to engage supporters and build on the momentum of the campaign.
Our Sponsors END_OF_DOCUMENT_TOKEN_TO_BE_REPLACED