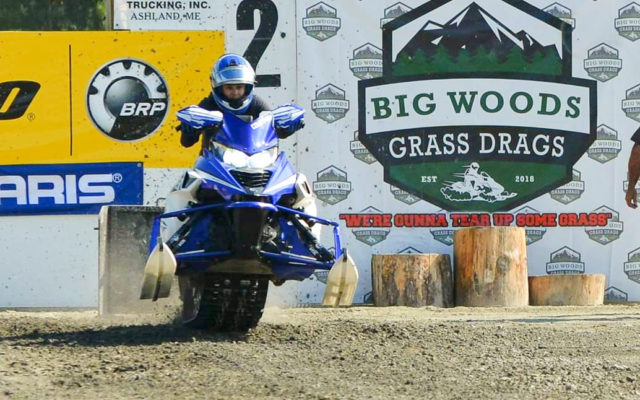 Nina Mahaleris • September 25, 2019
More than 1,000 people made their way to Ashland over the weekend of Sept. 21 and 22 for the Big Woods Grass Drags, an event that organizers have rekindled and hope to grow.

ASHLAND, Maine — More than 1,000 people made their way to Ashland over the weekend of Sept. 21 and 22 for the Big Woods Grass Drags, an event that organizers have rekindled and hope to grow.

Participants came from throughout Aroostook County and as far as southern Maine and Nova Scotia to take part in the races, organizer Lendell Buckingham said on Monday, Sept. 23.

The community of Ashland hadn’t seen a grass drags race since 1995. But in 2017, that changed with the establishment of the Big Woods Grass Drags. The event, which had its first race last year, aims to raise money for local organizations in the snowmobile off-season by inviting people both close to home and from away to take part in the races.

Buckingham said the decision to revive the grass drags is to not only raise money to maintain the snowmobile equipment but also to help the community.

“We’re trying to make it a community event,” he said.

Funds raised will go towards maintaining the equipment and trails, but the Big Woods organization also invited local non-profit groups to set up shop at the event and raise money for their own causes.

Eleven organizations turned out at the event between the two days to sell quick bites and treats for the participants. Members of the Ashland 2020 Project Graduation sold breakfast sandwiches, the Maple Moose offered their funnel fingers and lemonade and students advertised their homemade french fries to fund a trip to Costa Rica.

“We try to keep it as local as possible,” Buckingham said.

Other organizations such as the Advent Christian Church, the Ashland Fire Department, the Ashland Diner, Ashland Area Ski Club and Susan G. Komen 3 Day for the Cure, along with local businesses, also sold items to raise money for their programs.

Since its restart last year, the grass drags program seems to be gaining momentum. Buckingham said this year’s race was “bigger and better” than last year, with numbers of both participants and spectators up from 2018. Over one thousand people attended between the two days, up from 750 attendees the year before, according to Buckingham, and the number of racers also about doubled.

More than 20 individuals went home with first-, second- or third-place prizes and two winners walked away with $1,000 each. Tim Lary of Bar Harbor and Ethan Rossignol of Woodland both won $1,000 for first place in their classes, the improved stock 600cc race and the stock 800cc, respectively.

Other racers received prizes between $10 and $170 for their performances in the events.

A warm front will lift across the SJV this Wednesday with overrunning snowfall likely over the course of the day, with Fort Kent and vicinity receiving accumulations around 2 to 4 inches.
Our Sponsors END_OF_DOCUMENT_TOKEN_TO_BE_REPLACED