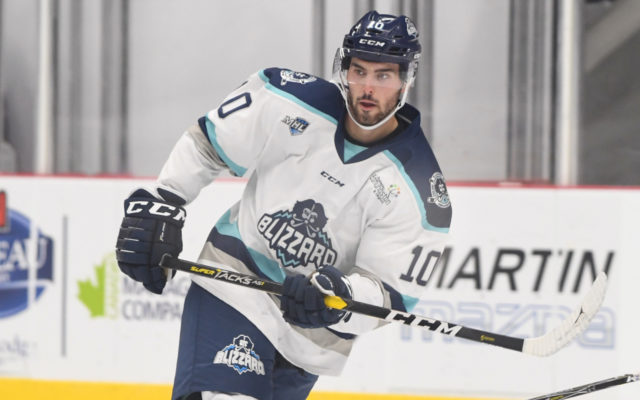 MIRAMICHI, New Brunswick — Brock McLeod rose to the occasion on Sept. 21 in Miramichi. The forward scored his first two goals of the campaign and added an assist on the insurance goal when he led the Edmundston Blizzard to a 4-2 triumph over the Miramichi Timberwolves.

This victory allowed the Blizzard (3w, 1l) to take sole position of the first place in the Eastlink North Division of the Maritime Junior A Hockey League. Edmudston is two points behind the Yarmouth (4w, 1l) who played one more game.

\ McLeod broke a 1-1 tie in the second period by scoring two goals in 39 seconds on the power play. He first found the back of the net at 9:14 when the Blizzard was playing with a two-man advantage. Then, at 9:53, he made it 3-1 Blizzard on a one-man power play.

Edmundston was quick to take the lead when Paul Leroux scored his first MHL goal on a 2-on-1 rush at the 22nd second of play. He made the right decision by choosing to shoot. Defenseman Christian Tsao, who was at his first shift in the league, was credited with the assist.

The second period ended with a 3-2 lead in favor of the Blizzard. Timberwolves Charles-André Cyphiot previously beat goaltender Antoine Lyonnais, at 18:19.

Both teams shot 36 times each. Lyonnais was better than his counterpart Olivier Charbonneau.

Brock McLeod was named the first star of the game, the second going to his teammate Chad Wilson (2 helpers), and the third to Jason Imbeault, of the Timberwolves (1 assist).

The Blizzard’s power play unit woke up. Emery Olauson’s squad scored three goals in eight attempts. They were 1 in 13 after the first three games.

There were many scuffles during the game. Two fights broke out in the second frame and the game ended with a total of 126 penalty minutes. The Blizzard spent 42 minutes in the penalty box and the Timberwolves twice more (84).

Only one member of Maine’s congressional delegation had come out in favor of impeaching President Donald Trump ahead of House Speaker Nancy Pelosi’s Tuesday announcement that the Democratic-led House of Representatives would begin an impeachment inquiry.
Apex Weather END_OF_DOCUMENT_TOKEN_TO_BE_REPLACED

Dale Crafts filed his nomination papers for Feb. 21 with the Secretary of State to officially be placed on the primary ballot on June 9, 2020, for the U.S. House of Representatives 2nd District race.
Our Sponsors END_OF_DOCUMENT_TOKEN_TO_BE_REPLACED