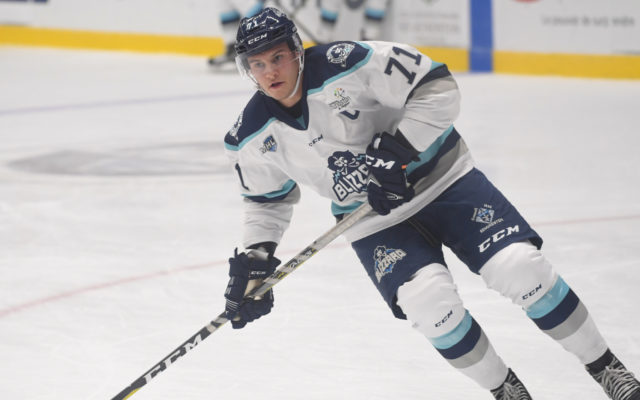 Contributed • September 24, 2019
Edmundston Blizzard players were tenacious from start to finish to turn things around on Sept. 20.

EDMUNDSTON, New Brunswick — They conceded a lot of pounds to their tough opponents but the Edmundston Blizzard players were tenacious from start to finish to turn things around and defeat the mighty Summerside Western Capitals 5-2 on Friday night at the Jean-Daigle Centre in a game of the Maritime Junior A Hockey League played in front of 2,575 enthusiastic fans.

Visitors imposed their rhythm in the first half of the first period. The 6-foot-6 giant Kallum Muirhead opened the scoring for the Western Capitals at 8:32 following a two-on-one. Emery Olauson’s squad responded well afterwards by multiplying the attacks. The first 20 minutes, however, ended in a 1-0 lead in favor of the islanders.

In the second frame, everything changed. The Blizzard hit in a nick of time with two goals in 1 minute and 33 seconds. Aaron Brown tied the game at 4:18, and Isaac Chapman made it 2-1 93 seconds later, spreading joy in the local crowd.

Ahead 2-1 to start the third, Tommy Bertrand scored that was to be the winning goal at 6:14 after a shot from the point. But a little more than two minutes later, the Capitals narrowed the gap to a goal thanks to Bennett MacArthur left alone in the crease besides goalie Ewan MacDonald.

The Western Capitals then regained momentum, firing 20 shots against the Blizzard net in the final period. But Chad Wilson completed a superb maneuver to score at 17:07. Chapman ended his evening with a second goal in an empty net to close the debate at 5-2.

Captain Tristan Gagnon, who was self-sacrificing throughout the game by throwing himself in front of the opposing shots and contributing offensively, earned the first star of the game. He had two assists. With two goals, Chapman piced up the third star. Capitals Muirhead earned the second star.

Goalkeeper MacDonald was brilliant in front of the Blizzard’s net. He was rock solid, especially during repeated assaults in the third by the Capitals. MacDonald repelled 30 of 32 shots he received. His counterpart, Dominik Tmej, was beaten four times on 35 shots.  The 36th shot ended in an empty net.

Only one member of Maine’s congressional delegation had come out in favor of impeaching President Donald Trump ahead of House Speaker Nancy Pelosi’s Tuesday announcement that the Democratic-led House of Representatives would begin an impeachment inquiry.
Apex Weather END_OF_DOCUMENT_TOKEN_TO_BE_REPLACED

Dale Crafts filed his nomination papers for Feb. 21 with the Secretary of State to officially be placed on the primary ballot on June 9, 2020, for the U.S. House of Representatives 2nd District race.
Our Sponsors END_OF_DOCUMENT_TOKEN_TO_BE_REPLACED