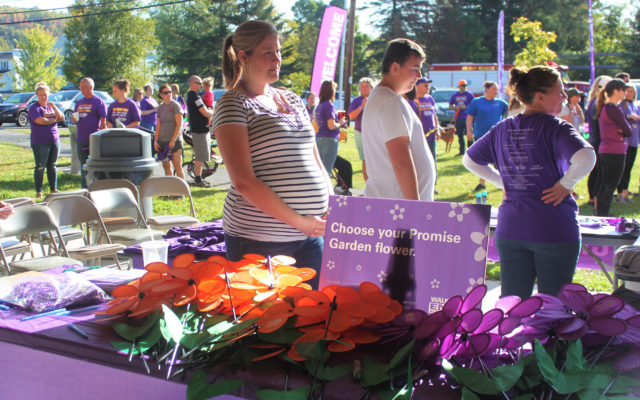 “Something was wrong but nobody could figure it out,” said Louella’s husband of 43 years, Philip Nadeau. “We thought she was just stressed out.”

Although she had a family history of Alzheimer’s Disease on her paternal side, Louella seemed far too young to have developed the disease.

A few years later Louella’s family noticed that she began repeating things she had already told them several times.

“That was when we really started looking into it,” said Louella’s son Robby Nadeau.

Doctors diagnosed Louella with early-onset Alzheimer’s Disease when she was just 54 years old. She died Feb. 11, 2018, at the age of 60.

Philip Nadeau, Robby Nadeau and Louella’s daughter Betsy Nadeau were among Louella’s family members who participated in the Walk to End Alzheimer’s 2019 in Fort Kent on Saturday.

As of Saturday morning, the Fort Kent walk had raised more than $15,000 for the Alzheimer’s Association.

“We’re here to remember our mother and raise money and hopefully save other families from the anguish and grief we’ve had to go through,” Robby Nadeau said.

The annual walk raises funds for the Alzheimer’s Association to provide support and education to those suffering with the disease and their loved ones, including a free 24-hour helpline. The money also funds scientific research to try and find a cure for Alzheimer’s Disease.

Two of Louella’s eight grandchildren — Charlotte, 6, and Abram, 4 — set up a lemonade and cookie stand during the walk to help raise funds for the fight against Alzheimer’s. Charlotte and Abram are the daughter and son of Robby and his wife Stephanie Nadeau.

Robby Nadeau said that if Louella were still alive, “she would enjoy her grandchildren very much.”

“She was loud and fun and she liked to clean,” Betsy said of her mother.

“She was full of life,” Robby Nadeau added.

Currently there are 29,000 people in Maine who have Alzheimer’s Disease and 69,000 caregivers of those who have the disease in the state.

Since 1982, the Alzheimer’s Association has provided $435 million to fund more thabnn 2,900 scientific investigations to try and find a cure for Alzheimer’s.

Donations are still being accepted online or by texting 2ENDALZ to 51555.

An upper-level trough will slide across the region today through Friday.
Our Sponsors END_OF_DOCUMENT_TOKEN_TO_BE_REPLACED