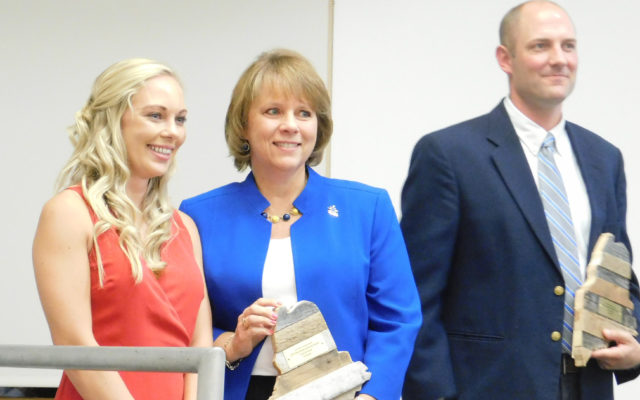 Nina Mahaleris • September 23, 2019
Some 200 County people joined together Sept. 19 to celebrate 15 of their own who are making waves, during Momentum Aroostook’s inaugural Aroostook Achievers Awards.

PRESQUE ISLE, Maine — Some 200 County people joined together Sept. 19 to celebrate 15 of their own who are making waves, during Momentum Aroostook’s inaugural Aroostook Achievers Awards.

The Aroostook Achievers was established by Momentum Aroostook about one year ago, said the organization’s chair, Ginger Kieffer. In recognizing local professionals who are paving the way in their own industries, Momentum Aroostook hopes to inspire young people to discover their own potential and establish successful careers here, too.

Joshua Buck of Maine Malt House, Logan Brewer of K&M Enterprises and Keith Thibeau of Thibeau Farms were given the agriculture and natural resources award. In the education category, Ben Greenlaw of SAD 1, Deborah Roark of the University of Maine at Presque Isle and Valerie Waldemarson of Caribou High School were also honored. 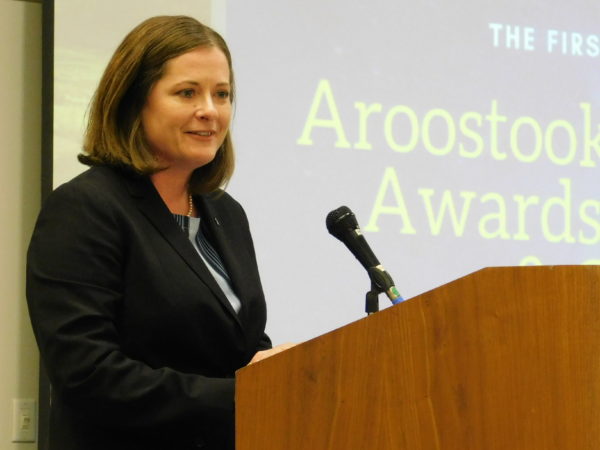 For their work in local government and civic leadership, Christina Kane-Gibson of the City of Caribou, Sean Leonard, a local attorney who has established his own practice and Ryan Pelletier of the County Commissioner’s Office of Aroostook were recognized.

Momentum Aroostook is part of a larger program, the Realize Maine Network, operated by the Maine Development Foundation. Like Momentum, it works with organizations around the state to encourage young professionals to establish careers in Maine.

Struggling to keep young people around, organizations such as Momentum Aroostook have created their own programs to attract people to live and work in The County. For some time, locals have noticed the effects of a declining population in Aroostook County, often called “out-migration.”

In her keynote address, Hannah Carter described the need for a collaborative effort in dealing with out-migration. Carter, a County native, is the current dean of the Cooperative Extension at the University of Maine.

She explained that local people can help to grow the population of The County by simply changing the way they talk about the area. 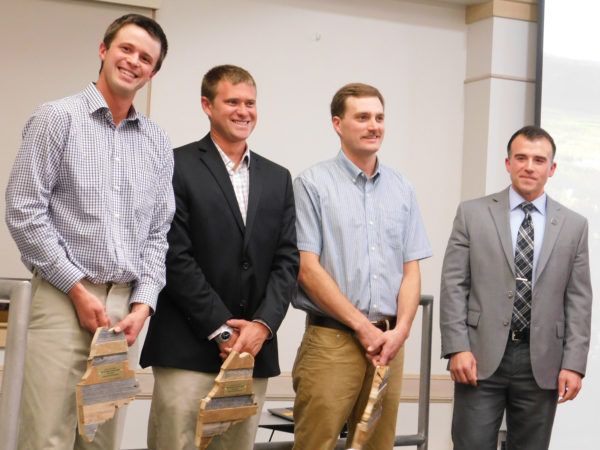 Keith Thibeau (left) Logan Brewer (middle) and Joshua Buck (right) pose for a photo during the Aroostook Achiever’s Event, Sept. 19, 2019. Each were recognized for their contributions in the agriculture and natural resources industry.
(Staff photo/Nina Mahaleris)

This idea resonated with Ben Greenlaw, a local administrator who is slated to take over as the next superintendent of SAD 1 come January 1. Greenlaw was born in Caribou but grew up in Lincoln. After about 10 years of teaching at Hampden Academy, he saw an opportunity to return to the County and pursue a career in school administration.

His mother, who was from Fort Fairfield, “always talked about how much she loved living in the County,” during his childhood. So, when he saw an opportunity to work at Presque Isle High School, he took it.

Even before moving back, Greenlaw recognized the advantages of working in Presque Isle. He knew the high school was well-regarded around the state and had seen how well students represented their school and community.

On Friday, he discussed contributions the school system has made to ensure students understand what options are available to them after graduation as a way to avoiding out-migration. He said the key is educating kids about the advantages of living and working here.

“We’ve got to make sure kids know there are opportunities here and what kinds of opportunities are here [for them],” he said. “It starts with the people who live here.”

Greenlaw spoke about one particular initiative through SAD 1 called, “Plan for your future day,” which takes second-year high school students on field trips to visit local businesses and organizations where they could eventually work.

Educating people who aren’t familiar with The County is perhaps just as important, too. While The County might seem isolated to outsiders, Greenlaw said ties within the community make the area special.

“You’re not isolated when you’re here,” he said.

Like Carter described in her speech, Greenlaw said people can educate others about the benefits of living in The County by changing the way they talk about the area.

“Having a positive message about Aroostook County is probably the best thing we can do,” he said.

Cloudiness in the region Thursday afternoon along with a slight chance for isolated showers Thursday night and Friday.
Crown Politics END_OF_DOCUMENT_TOKEN_TO_BE_REPLACED