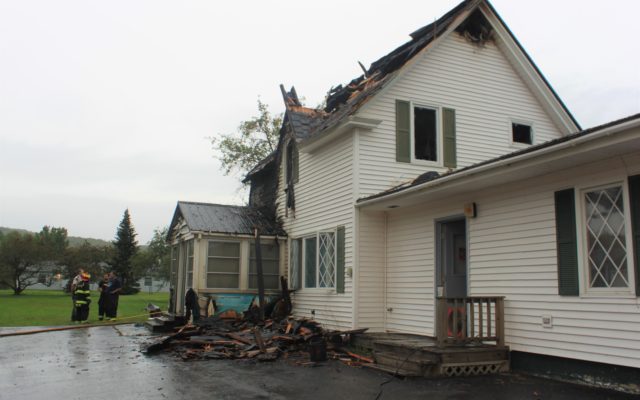 Jessica Potila, SJVT / FhF Staff Writer • September 18, 2019
The Maine State Police have arrested a St. Francis man for arson following a Saturday morning fire in a Main Street building which houses both a residence and the local post office.

ST. FRANCIS, Maine — The Maine State Police have arrested a St. Francis man for arson following a Saturday morning fire in a Main Street building which houses both a residence and the local post office.

The owner of the building, Mike Abbott, lives in the residence at the back of the building and woke up at around 2:30 a.m. to discover his home was in flames. Abbott fled from the building and was then nearly struck by a live electric wire that fell to the ground as he was making his escape, according to St. Francis Fire Chief Gerald Jandreau.

Abbott was the only person in the building during the fire, and no pets were inside. Jandreau recognized that the fire was suspicious and contacted the Office of the State Fire Marshal to investigate the cause of the fire, which originated outside in the back of the building where Abbott lives.

As of Wednesday, Sept. 18, McBreairty was being held at the Aroostook County Jail in Houlton.

A warm front will approach the Valley today and cross the region this evening.
Our Sponsors END_OF_DOCUMENT_TOKEN_TO_BE_REPLACED