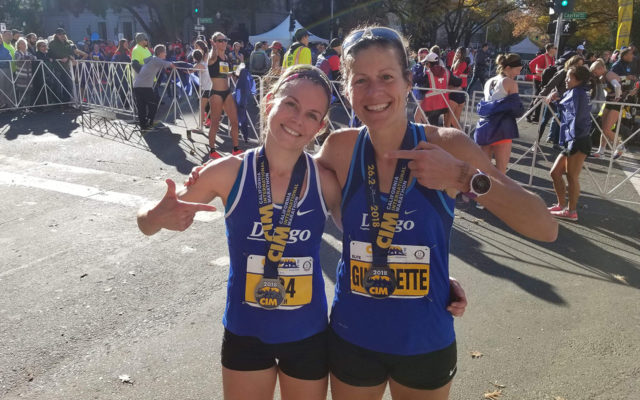 Mulcahy, a math educator at Fort Kent, is a 2003 graduate of the school where she excelled academically and athletically. She was valedictorian of her high school class and participated on the tennis and volleyball teams.

Mulcahy continued to demonstrate a knack for high achievement when she graduated top of her class from St. Joseph’s College in 2007.

Mulcahy said she only began running herself in 2003.

“I got into the habit recreationally for my own personal enjoyment,” she said. “It was something for me to do where I didn’t have a care or a worry and could relieve a little bit of stress. I competed for the first time in 2009 and started marathoning in 2012. Marathons are my go-to and where I feel the most comfortable and successful. I do them as training runs for other events.”

Mulcahy said her fastest personal marathon time was at the California International Marathon in 2018, which is where she qualified for the Olympic Trials with a time of 2 hours, 44 minutes, 34 seconds.

She also holds the course record for the Bay of Fundy International Marathon with a time of 2:49:18. She has won that marathon five times.

Mulcahy lives in Fort Kent with her husband, Jonathan and the couple’s 5-year-old daughter, Olivia, and 2-year-old son, Isaiah.

As the Maine Turnpike expects 1 million travelers alone over the Labor Day weekend, policymakers are gearing up for a sprint to solve one of the state’s most intractable problems: a long-standing — and growing — transportation funding gap.
Apex Weather END_OF_DOCUMENT_TOKEN_TO_BE_REPLACED

Low pressure will move towards the Northeast from a low pressure over the Ohio Valley/Pennsylvania region this evening with the primary low tracking into Québec tomorrow.
Campaign Corner END_OF_DOCUMENT_TOKEN_TO_BE_REPLACED

U.S. Senator Angus King (I-Maine) today visited with students at the University of Maine at Fort Kent (UMFK) to discuss his work in Maine and Washington and answer questions from students.
Our Sponsors END_OF_DOCUMENT_TOKEN_TO_BE_REPLACED