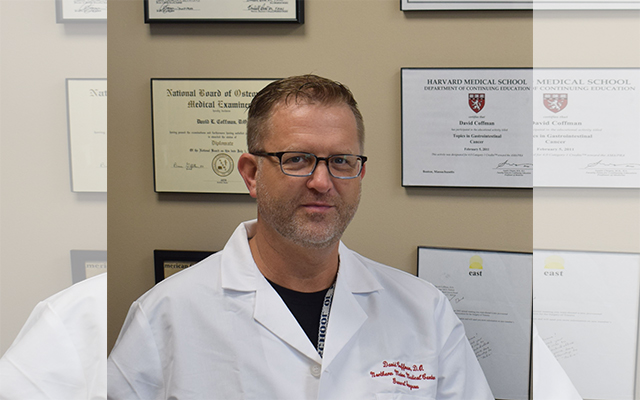 Coffman was first employed at the hospital from 2012 to 2016 as a general and trauma surgeon and surgical critical care intensivist. He said he returned to Northern Maine Medical Center for the opportunity to teach medical students, to be involved with the construction of the state-of-the-art operating room and to be a part of the diverse medical staff.

“As a patient advocate, I seek quality medical care and operational efficiency,” he said.

He has a longstanding interest in the application of psychology principles in the trauma setting, working with patients and families, making him better prepared to understand family dynamics and what they are experiencing during a trauma situation.

Coffman’s interest in health care began in his high school years when he worked several summers as a certified nursing assistant. In 1989, he received his undergraduate degree from Wartburg College in Waverly, Iowa, and his doctor of osteopathic medicine degree from Des Moines University. After completing his general surgery residency at Des Moines General Hospital in 1998, where he was chief resident, he completed a transplantation mentorship at the University of Nebraska Medical Center, and general surgery internship at Des Moines General Hospital, Des Moines, Iowa.

He maintains a substantial involvement in ongoing education and teaching, especially in medical education. He has extensive involvement in numerous leadership and scholarly roles: associate professor of medicine and surgery at Touro University College of Medicine, Vallejo, California, where he was honored as Primary Care Teacher of the Year by his students; assistant professor of surgery and longitudinal integrated curriculum surgery lead at NMMC for the Frank H. Netter MD School of Medicine, Quinnipiac University, North Haven, Connecticut.

He is currently working on a manuscript describing his research of medical education pedagogy. He has been published nationally and internationally in the medical field and beyond. He is a four-time recipient of the Top Physician Award by the Consumer’s Research Council of America. In 2015 he was the surgeon member of the board of directors on the National Board of Certified Registered Nurse Anesthetists.

“With 26 years of experience, Dr. Coffman brings a wealth of knowledge, expertise and leadership to serve our patients,” said Sirois.

Among his other interests, Coffman is a violinist and instructor. He participated in biblical archaeological exploration and literature research at the University of Haifa, Tel Aviv, Israel in 1988. On the lighter side, he enjoys reading and cooking in his leisure time. He resides in Fort Kent.

Only one member of Maine’s congressional delegation had come out in favor of impeaching President Donald Trump ahead of House Speaker Nancy Pelosi’s Tuesday announcement that the Democratic-led House of Representatives would begin an impeachment inquiry.
Apex Weather END_OF_DOCUMENT_TOKEN_TO_BE_REPLACED

Dale Crafts filed his nomination papers for Feb. 21 with the Secretary of State to officially be placed on the primary ballot on June 9, 2020, for the U.S. House of Representatives 2nd District race.
Our Sponsors END_OF_DOCUMENT_TOKEN_TO_BE_REPLACED