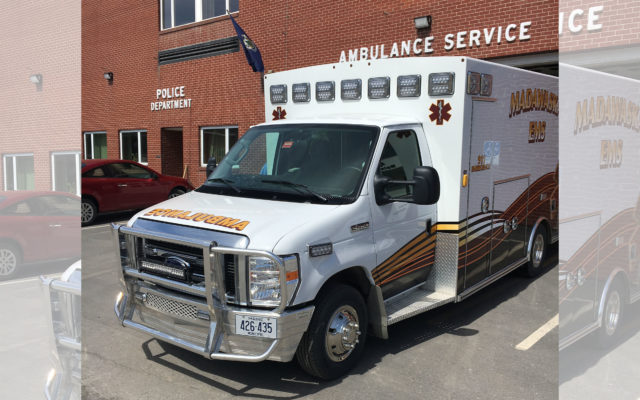 Morgan Mitchell • September 4, 2019
An ambulance comes up behind you as you travel down a two-lane highway. There is nowhere to pull over and the lines indicate do not pass. What do you do?

MADAWASKA, Maine — An ambulance comes up behind you as you travel down a two-lane highway. There is nowhere to pull over and the lines indicate do not pass. What do you do?

The situation is common on Route 1 since the Madawaska Ambulance Service travels from Madawaska to Northern Maine Medical Center on a daily basis.

Jessica Page with the Madawaska Ambulance Service has some tips for what to do when you’re in that situation.

“If we’re in emergency mode, with our lights and sirens on, legally, we drive with due regard, which means that we cannot risk the safety of ourselves or others,” Page said. “However, when there are double lines for us and we can safely pass, then we do.”

Regardless of whether there is a paved shoulder, drivers are required by law to pull over and make a complete stop. On Route 1, that could mean driving into the brush a bit.

“We don’t expect anyone to take a ditch for us,” she said. “We would rather them pull off and still be halfway in the road, than them continuing to drive until there is a driveway to pull into.”

She added that Main Street is one of the more difficult areas too, especially during lunch hours when people are parked in the downtown area while they do errands.

“We still go really slow down Main Street and generally follow the speed limit to a “T” for the most part, unless both lanes are clear. But we expect people on Main Street to pull over to the best of their abilities and stop as well.”

It is more important to come to a full stop than to pull out of the road completely.

“The stopping part is more important than pulling over completely out of the road,” she said. If you’re stopped, then you are easier to go around than someone who is continuing to go slowly down the road.”

In order to alert the ambulance that you are aware of its presence, Page suggests putting on your blinker to signal that you intend to pull over and stop.

“We expect that the person we are coming up behind and the person who we are meeting, then they are both supposed to pull over to the right and completely stop so that way we can actually pass safely,”  Page said.

Oncoming traffic is also required to pull over and stop as well to allow the ambulance ample space to maneuver through traffic.

“Nobody stops when they are oncoming and it blows my mind,” she said.

Page said that the ambulance service does not typically run sirens unless it is a life or death situation like heart attacks or strokes, where every second counts.

“When we transport someone with lights and sirens, generally that means that that person is not doing well,” Page said.

During an ambulance ride, at any moment, a provider in the rear of the ambulance could be moving around to help take care of a patient, according to Page.

“The least amount of jerky movements we can make as the driver of the ambulance is what we aim to achieve, because any little movement we make could be catastrophic for those in the back of the ambulance,” she said. “Whenever I meet up or see an ambulance, you just think that it could be your loved one in the back of that ambulance and you would want them to get to the hospital safely. If it were their loved one, they would want the person to get to the hospital as quickly as possible.”

However, it is not only the right thing to do, it is the law. Failure to yield the right of way to an emergency vehicle is a class E crime and could land violators in jail for up to six months and cost up to $1,000 in fines.

So when you are traveling down Route 1, Main Street, or any roadway for that matter, and an emergency vehicle comes up behind you or is about to meet you in the opposite lane, just remember, signal move stop. Signal that you are moving over, move over, and stop completely no matter which side of the road you are on.

As the Maine Turnpike expects 1 million travelers alone over the Labor Day weekend, policymakers are gearing up for a sprint to solve one of the state’s most intractable problems: a long-standing — and growing — transportation funding gap.
Apex Weather END_OF_DOCUMENT_TOKEN_TO_BE_REPLACED

A cold front moved through the Valley early this morning, and it will be followed by an Arctic cold front this afternoon.
Campaign Corner END_OF_DOCUMENT_TOKEN_TO_BE_REPLACED

U.S. Senator Angus King (I-Maine) today visited with students at the University of Maine at Fort Kent (UMFK) to discuss his work in Maine and Washington and answer questions from students.
Our Sponsors END_OF_DOCUMENT_TOKEN_TO_BE_REPLACED