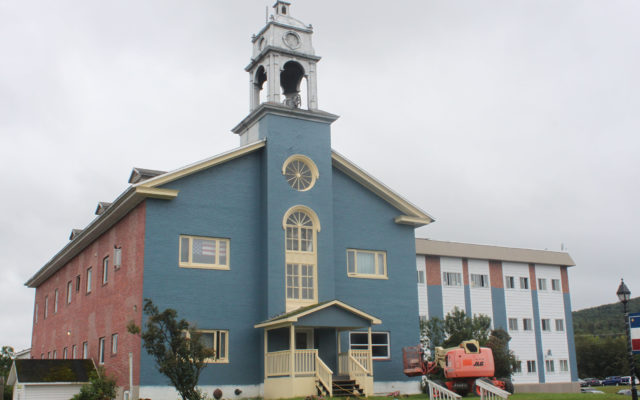 Jessica Potila, SJVT / FhF Staff Writer • August 30, 2019
When Brandon Smith purchased the B and M Apartments in Fort Kent at the end of 2016, he had in mind a five-year plan to renovate the dilapidated 30-unit property.

FORT KENT, Maine — When Brandon Smith purchased the B and M Apartments in Fort Kent at the end of 2016, he had in mind a five-year plan to renovate the dilapidated 30-unit property.

Smith, a Caribou resident who owns and operates B.S. Carpentry, has so far completed major repairs within the East Main Street apartment complex. As anyone who has driven or walked by the B and M apartment complex most likely noticed, the two buildings comprising the complex are undergoing major changes as well.

Smith purchased the two buildings, which housed the St. Louis Convent and St. Louis Convent School up until 1969 before being converted into apartments, after learning about the buildings while performing roofing on another Fort Kent property.

“I thought it would be a great investment. I knew it needed a lot of work, but I thought it would be something to invest in,” Smith said. “I like buying buildings that are foreclosed like this one was. I just bought another one in Presque Isle that we’re gonna start on this winter.”

Over the past three years, Smith renovated the flooring in the hallways of the buildings as well as in almost every apartment. He also replaced the appliances in all 30 units, tore down an old building out back, and removed an old oil tank from the ground.

Smith also addressed mechanical issues with the buildings, including water pipes and and the furnace. He put in new LED lights throughout the property to cut electricity rates as well as performed general maintenance, such as replacing old doors.

“It’s just been on ongoing project,” he said.

“Painting the exterior is just another step to get rid of the bad blood this (property) has had for years,” Smith said.

He anticipates the painting project, at least in terms of the fronts and sides of the buildings, will be completed within the next month. Some areas in the back of the buildings will take a little longer to complete, he said.

“So far what you see for blue paint, we’ve already used 46 gallons of paint on it; I’m expecting it’s gonna take us about 130-140 gallons to finish it,” Smith said.

As the Maine Turnpike expects 1 million travelers alone over the Labor Day weekend, policymakers are gearing up for a sprint to solve one of the state’s most intractable problems: a long-standing — and growing — transportation funding gap.
Apex Weather END_OF_DOCUMENT_TOKEN_TO_BE_REPLACED

The Valley will receive an inch or less of accumulation from Thursday's system based on current forecast model data.
Our Sponsors END_OF_DOCUMENT_TOKEN_TO_BE_REPLACED