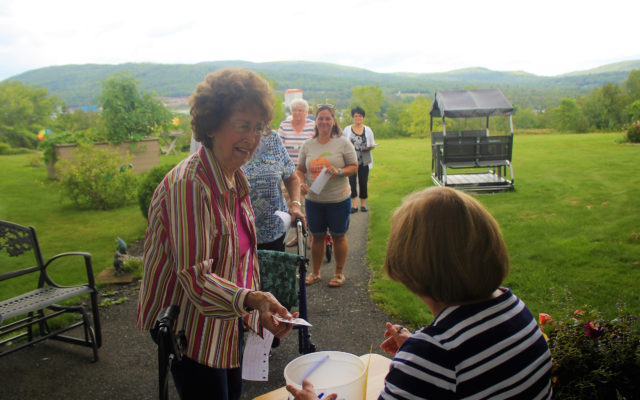 Jessica Potila, SJVT / FhF Staff Writer • August 26, 2019
Though the stakes weren’t high, the level of fun was when Crosswinds residents took part in a poker run at the residential care center on Thursday, Aug. 22.

FORT KENT, Maine — Though the stakes weren’t high, the level of fun was when Crosswinds residents took part in a poker run at the residential care center on Thursday, Aug. 22.

The residents took in some fresh air as they walked and rolled to stations set up outside the center and drew a playing card from a bucket at each station.

Resident Irma Pelletier, 91, who is originally from New Canada, said she is no stranger to poker. Pelletier first drew a 7 of clubs, but did not let that discourage her. 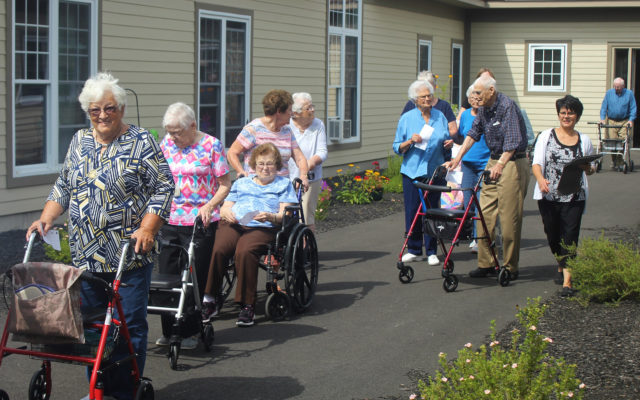 “Well, it might be a straight. Who knows?” she said as she walked to the next station for a second card.

Pelletier has been married to her husband, Renaud Pelletier, for 70 years and has been living at Crosswinds for about a year and a half, she said.

“Every Tuesday I go to Edmundston for supper with my son and his wife (Ray Pelletier and Mae Pelletier) and we go to Grey Rock,” she said. “He’s one of the twins. We have 10 children.”

Pelletier said she likes living at Crosswinds and enjoys the activities there, such as the poker run.

“It’s the place to go when you get older,” she said.

There was plenty of suspense and excitement for Pelletier during the poker run as she completed the first four stations with an open-ended straight draw.

However, she ultimately completed the game one card short of a straight.

Resident Phil Dumond had the winning hand with two pair — sixes and nines — and received a $5 prize.

After the poker run was over, the residents refreshed themselves with ice cream ployes from Bouchard’s Family Farm.

Deep low pressure near Newfoundland will keep breezy conditions across the SJV today and tonight as it interacts with high pressure building down from the northwest.
Our Sponsors END_OF_DOCUMENT_TOKEN_TO_BE_REPLACED