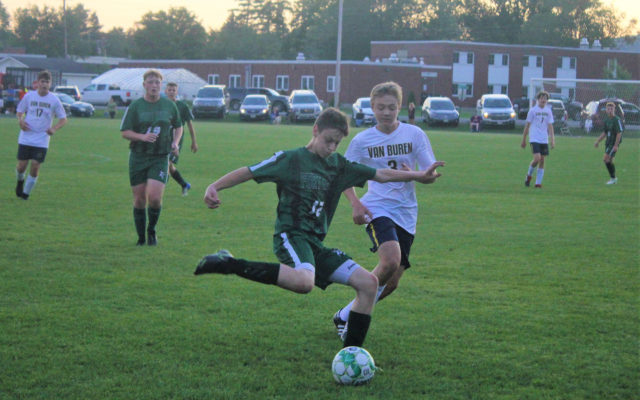 Jessica Potila, SJVT / FhF Staff Writer • August 23, 2019
The Van Buren boys varsity soccer team put up a fight, but was no match for Fort Kent during the Warriors home opener on Thursday, Aug. 22.

FORT KENT, Maine — The Van Buren boys varsity soccer team put up a fight, but was no match for Fort Kent during the Warriors home opener on Thursday, Aug. 22.

The Warriors defeated the Crusaders 3-0. Jaren Hartt kicked in the first goal of the game and Colby Theriault added two more.

Keegan Cyr racked up two assists and Austin Delisle had one.

The Fort Kent boys were the Class C runners up at the state championships last year and since then have lost eight seniors to graduation.

The young team proved capable on the field Thursday.

“They’re catching on quick,” said co-assistant coach Kimar Smith “Their attitude toward practice is spot on; they give 100 percent. We just need to sharpen them up more.”

The Warrior boys will next take on the Central Aroostook Panthers on Friday, Aug. 30, in Mars Hill.

As the Maine Turnpike expects 1 million travelers alone over the Labor Day weekend, policymakers are gearing up for a sprint to solve one of the state’s most intractable problems: a long-standing — and growing — transportation funding gap.
Apex Weather END_OF_DOCUMENT_TOKEN_TO_BE_REPLACED

A cold front moved through the Valley early this morning, and it will be followed by an Arctic cold front this afternoon.
Campaign Corner END_OF_DOCUMENT_TOKEN_TO_BE_REPLACED