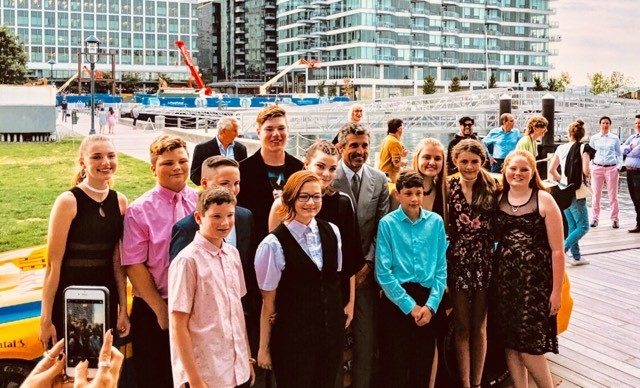 Jessica Potila, SJVT / FhF Staff Writer • August 21, 2019
Movie star and Maine native Patrick Dempsey invited members of a Fort Kent family touched by cancer to attend the Aug. 6 Boston premiere of a new movie he co-produced, “The Art of Racing in the Rain.”

FORT KENT, Maine — Movie star and Maine native Patrick Dempsey invited members of a Fort Kent family touched by cancer to attend the Aug. 6 Boston premiere of a new movie he co-produced, “The Art of Racing in the Rain.”

The movie stars Milo Ventimiglia and Amanda Seyfried and is based on the novel by Garth Stein.

Their sons Ian Albert, 17, and Gavin Albert, 12, attended the “Space to Breathe” adventure program at Camp Kieve in Nobleboro for five days in July. 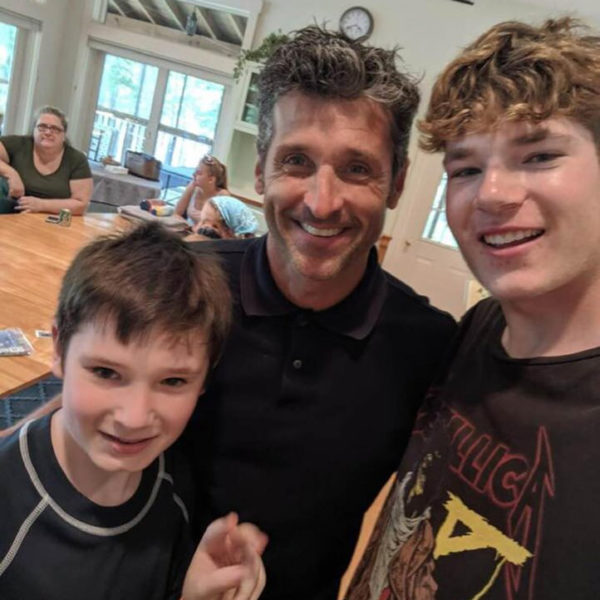 Actor Patrick Dempsey visited the “Space to Breathe,” camp which the Dempsey Center sponsored in July to provide adventures for teenagers ages 12-18 who have a parent or a sibling living with cancer or who have lost a parent or sibling to cancer. Among those who attended the camp were Fort Kent brothers Ian and Gavin Albert. From left: Gavin Albert, Patrick Dempsey and Ian Albert. (Ian Albert)

The Dempsey Center, a cancer support center which Patrick Dempsey founded, sponsors the camp, which is free to children ages 12-18 who have a parent or a sibling living with cancer or who have lost a parent or sibling to cancer.

Ian and Gavin’s sister, Kearston Albert, 10, has battled acute lymphoblastic leukemia since she was first diagnosed with the illness at just 3 years-old. Kearston has been in remission for a year now.

Dempsey visited the camp this year and spent time with the Albert boys and other campers, all of whom he invited, along with their families, to attend the movie premiere.

“Patrick Dempsey just showed up one day while they were gearing up to do the ropes course that they have set up there in the woods right outside camp Kieve,” Sheri Albert said. “He walked in, hung out, talked with them, then decided he was going to do the course with them. He was with them for several hours.”

Michael, Sheri, Ian, Gavin and Kearston all attended the movie premiere. The Alberts’ daughter Robin, 20, who provided a life-saving bone marrow transplant to her sister Kearston in 2016, is living and working in Vermont so was unable to attend the movie.

“The kids got to take a picture with Patrick Dempsey in front of the actual race car from the movie,” Albert said. “It was such an honor and a pleasure for our boys to be invited by Patrick Dempsey himself, and to see how he interacts with the children is truly amazing.”

The actor founded The Dempsey Center in honor of his mother Amanda Dempsey, who died in 2014 after battling ovarian cancer for 17 years.

For information about the Space to Breathe program or the Dempsey Center, visit the organization’s website at  www.dempseycenter.org

As election season winds down to its final stretch, candidates are raising money to fund their campaigns, hoping to prevail in the Nov. 3 election, which has already seen millions of Americans cast their ballots in early and absentee balloting.
Apex Weather END_OF_DOCUMENT_TOKEN_TO_BE_REPLACED

Low pressure that produced yesterday's Nor'easter will continue to move away from the region in the Maritimes. A large upper-level low associated with the system will move east across the region today.
Our Sponsors END_OF_DOCUMENT_TOKEN_TO_BE_REPLACED