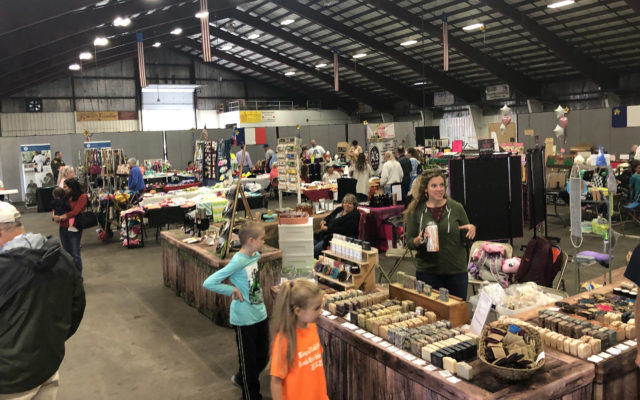 Morgan Mitchell • August 19, 2019
Thousands of people from near and far gathered in Madawaska to enjoy the multitude of festivities the 42nd annual Acadian Festival and Madawaska’s 150th Anniversary had to offer over the weekend of Aug. 15-18.

MADAWASKA, Maine — Thousands of people from near and far gathered in Madawaska to enjoy the multitude of festivities the 42nd annual Acadian Festival and Madawaska’s 150th Anniversary had to offer over the weekend of Aug. 15-18.

The celebration kicked off with Acadian Day Aug. 15 with a more traditional Acadian feel of chicken stew and ployes, an Acadian Mass, the Tintamarre parade, and live entertainment.

Marching down the street clad in red, blue, and yellow were close to a dozen people. They marched all yelling and clanging household items together to make as much noise as possible.

“That’s been the tradition,” said Gerald Fongemie, who was in the parade that marched around the Bicentennial park Thursday. “We’re here and we’re making noise.”

This year, Acadian Day actually kicked off the Acadian Festival, where in the past, that wasn’t always the case.

“Be proud, be Acadian, show your heritage,” Fongemie said.

The next day began with the watermelon eating contest.

One family from Saco had an entry from 13-year-old daughter Kelsey Payson. Her mother, Jennifer Molloy, said her fiance died last Christmas and in her grief, decided she was going to take her daughters on a vacation to the most northern point in Maine. After she called a friend to ask when would be the best time to visit the Valley, she decided on the Acadian Festival.

“Everyone is really nice here, the nicest people all around,” Payson said as her mother added that “the people are the ones making the trip special.”

The art expo, the quilt show, and the craft fair began on Friday and continued throughout the weekend. The art expo took place in the Chamber and featured a few new artists including Lorie Bonville Smith.

At the quilt show, Daigle’s Furniture was filled with quilts that blanketed over all of the furniture. Members of the Acadian Quilters walked around to answer questions while some gave demonstrations.

One member of the guild brought her 12-year-old grandson who proved to be a prodigy of the paper piecing technique of quilting after only learning to sew in one day.

Later Friday night, Party Du Main Street kicked off with events up and down Main Street like a corn hole tournament, bounce houses, a poutine eating contest and more.

The poutine eating contest was part of the Poutine Palooza put on by the chamber. The palooza also incorporated restaurants in the area who wanted to enter their poutines in the running to find the most original and the best traditional.

The winners of the restaurant contest original poutines were Misty Meadows in third, Dolly’s in second, and Jeff’s Pizza in third. Misty Meadows also won the best traditional poutine category.

For the eating contest, there were three divisions — children, men and women. The children had to eat 1.5 pounds of poutine, the women had to eat 2.5, and the men had to eat 6 pounds. No one lost their poutine during the competition.

The next day marked Family Fun Day at the Multi-Purpose building in Madawaska. There, families could enjoy activities like a baby crawling contest, a treasure hunt, monster truck rides, car racing, side shows and entertainment. There was also a huge bounce house section blocked off for children to go and play.

One activity on site was face painting by Mimi Clavette. Ashley Plourde, who was waiting for her son to finish getting his face painted, said this was something her family does every year because of its affordability and fun.

“These events really bring everyone out together to enjoy some time and celebrate,” Plourde said. “I hope they always keep the family-related days because I think that is a really big reason why other communities come into ours.”

The Femmes of Rock also made an appearance at a sold out concert Saturday night, which was going on while fireworks exploded in the night sky.

“We wanted to do something that was bigger and that hadn’t been done before,” said President of the Acadian Festival Committee Chris Braley. His wife, Mindy, added that she doesn’t “ever remember a concert this big in Madawaska.”

“You sat in that venue last night and the crowd that was in there, the enthusiasm that everybody had, you did not know you were in Madawaska, Maine.”

Sunday held the human foosball competition, more bounce houses, and some other events that carried over from family fun day.

As human foosball commenced, Project Graduation for the Madawaska Middle High School helped tear down the stage area from the concert the night before, and the Boy Scouts cleaned up the trash earlier in the day.

“If it weren’t for project grad and the Boy Scouts we would have all that work to do, so they have been a major asset to us,” Chris said.

Project Graduation gets support from the Acadian Festival for their funds because Chris said he knows how fundraising goes.

“Hopefully people see that the festival is growing and people will come forward to help and volunteer,’ Chris said.

Mostly cloudy skies are expected across Fort Kent today. Clouds will thicken this afternoon as an area of low pressure quickly moves east from the Great Lakes and crosses Maine tonight then heads into the Maritimes Thursday morning.
Our Sponsors END_OF_DOCUMENT_TOKEN_TO_BE_REPLACED