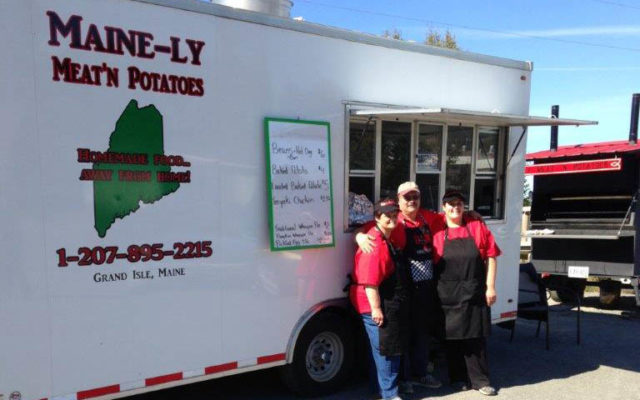 Morgan Mitchell • August 16, 2019
On any Thursday or Sunday at Music in the Park, either in Grand Isle or Madawaska, you will find a small white food trailer with a line of people that extends across the park. It’s the locally famous Maine-ly Meat ‘n Potatoes food truck.

GRAND ISLE, Maine — On any Thursday or Sunday at Music in the Park, either in Grand Isle or Madawaska, you will find a small white food trailer with a line of people that extends across the park. It’s the locally famous Maine-ly Meat ‘n Potatoes food truck.

The truck got its start in 2014 when the Acadian Congress was looking for people to serve food in anticipation of feeding the “hordes of people.” Rita and Daniel Dionne accepted the challenge and began their quest to get certified to sell food out of a truck.

While the Acadian Congress did not bring in the numbers expected, Maine-ly Meat ‘n Potatoes was ready for anything and the business took off. 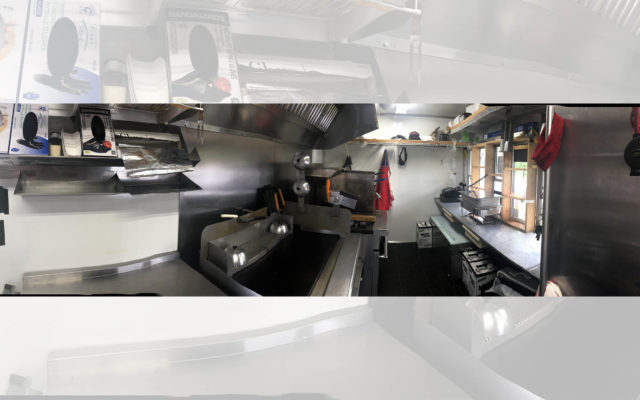 The inside of this 18-foot food truck holds up to five people at a time during any Sunday or Thursday during Music in the Park. (Morgan Mitchell)

Rita said she has been told repeatedly that she is a good cook. As a mother of five, Rita felt she was busy enough just cooking for her family, but as her children grew up, Rita said they were capable of “microwaving their own hotdogs.”

Rita said her sons help behind the scenes and her daughters work on the truck.

“The boys won’t ever help inside the truck, but the boys will come to the back door and eat,” Rita said with a chuckle.

At any point during serving hours, it usually takes 4-5 people to “run the show” and they are all on the truck that Rita likes to describe as “18 feet by not so big.”

“Dan made it so we have all the conveniences of home in an 18 by not-so-big,” Rita laughed.

As a machinist by trade, Daniel, who currently works as a supervisor at the paper mill in Madawaska, has tweaked the truck and customized it to make every inch count. 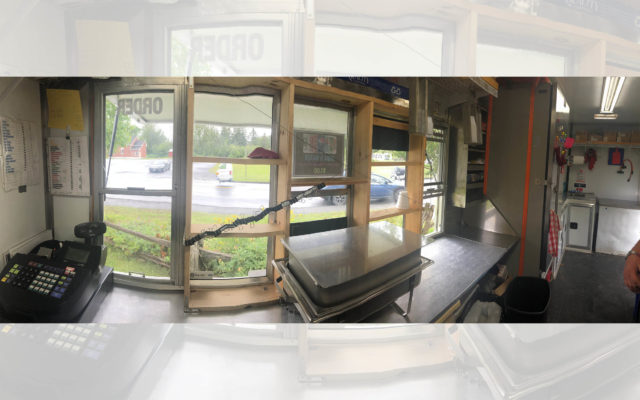 The inside of this 18-foot food truck holds up to five people at a time during any Sunday or Thursday during Music in the Park. (Morgan Mitchell)

Inside the small truck, custom-built shelves, ticket sliders for orders, utensil holders and a soda cooler converted from a deep freeze showcase the hard work Daniel has done to make each day operate as smoothly as possible. He even constructed an addition for a toaster since Rita said she refuses to “give out a cold bun.”

“I was raised on a farm, so that’s why we make do with what we can,”  Daniel began. “And if you didn’t have it you made it,” Rita finished.

As far as the food goes, Rita takes pride in the fact that almost everything on the truck is homemade, from the dressings to the poutine gravy.

“As much is homemade as can be,” Rita said.

Aside from burgers and hot dogs, Maine-ly Meat and Potatoes serves an array of different poutines. For the Acadian Festival this year, the Dionnes are taking part in the Poutine Palooza and serving up specialty poutines like Thanksgiving dinner, chicken cordon bleu, chicken alfredo with or without broccoli, pulled pork, chili, hamburger, a breakfast one, chicken pot pie, a Maine-ly Mac and original poutine.

The family also serves Delsie Dips, which are bananas frozen and dipped in chocolate, where all the proceeds go to a savings fund for Rita’s granddaughter Delsie. Each banana is $2 and she can make anywhere from $10-$40 per event they attend for the fun, according to Rita.

Rita and Daniel also have taken on catering and food-to-go for parties, birthdays, class reunions, and even weddings. While Rita also operates a sweets and treats bakery out of her home where she makes foods like whoopie pies, her famous Bismarks, and other sweets that are sold all over the County.

The couple said their favorite part is serving the people and hearing that their food is awesome.

“They’re happy so it makes me feel happy,” Rita said.

“It’s a pride and a challenge, providing a top notch meal,” Daniel said.

A cold front will cross the region today associated with the upper trough and low which will absorb the remnants of Isaias in Canada.
Our Sponsors END_OF_DOCUMENT_TOKEN_TO_BE_REPLACED