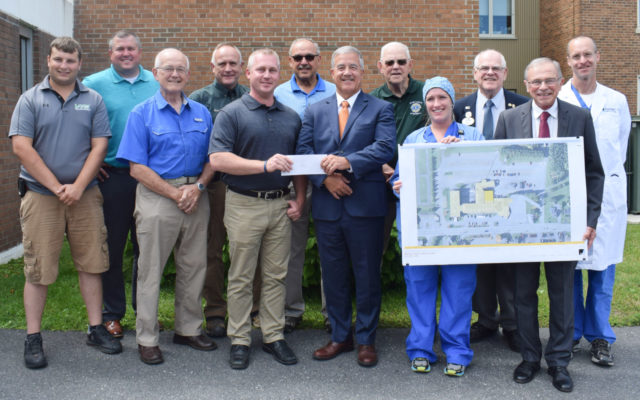 The Lions Club is the first contributor to the NMMC Foundation’s donor campaign for the operating room and four-story expansion.

When the club decided to support the NMMC project, Michael Collins, then president, said, “This is a very important addition for the Valley and we salute the entire hospital staff for their dedication to the well-being of our citizens. It is a pleasure that our club is the lead on this most important expansion.”

In 1952, the Lions Club was one of the original contributors recognized on the Founders List for the construction of Peoples’ Benevolent Hospital.

Lions Club International has been serving communities around the world since 1917. According to the LCI, there are approximately 1.4 million caring men and women who serve together with uncommon kindness, putting needs of neighbors and communities first. The Fort Kent club, comprised of over 120 members, is one of 48,000 in a global network of volunteers around the world serving their neighbors.

In line with Lions International’s vision toward humanitarian service, the local organization continues to demonstrate their role as community leaders by supporting the building expansion at NMMC, 67 years after the hospital was originally built.

“While keeping in line with Lions International’s motto, ‘We Serve,’ the Fort Kent Lions wholeheartedly stand behind and overwhelmingly support NMMC’S expansion and modernization project, just as we did 67 years ago when this amazing institution was built,” said Kristopher Malmborg, club president.

Peter Sirois, NMMC president and CEO, said, “The four-story, 15,600-square-foot addition is vital to providing the highest quality care to our patients and to the continued success of the hospital. By building a new space, it allows the hospital to make the necessary upgrades and renovations, for the several service lines affected, without disruption to patient access”.

NMMC officials believe that the upgraded services will also support recruitment and retention efforts which are critical for a  small rural community such as Fort Kent.

Individuals or groups wishing to learn more about the NMMC Foundation’s campaign may call 207-834-1353.

A cold front will cross the region today associated with the upper trough and low which will absorb the remnants of Isaias in Canada.
Our Sponsors END_OF_DOCUMENT_TOKEN_TO_BE_REPLACED