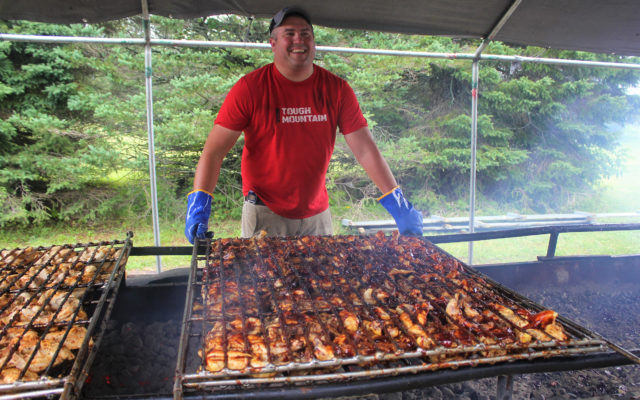 Jessica Potila, SJVT / FhF Staff Writer • August 13, 2019
Once again. two local groups whose aim is to serve others succeeded in helping their entire community when the Fort Kent Lions Club served up their annual, and always sold-out, Chicken Barbecue to raise funds for Boy Scout Troop 189 at Riverside Park.

FORT KENT, Maine — Once again. two local groups whose aim is to serve others succeeded in helping their entire community when the Fort Kent Lions Club served up their annual, and always sold-out, Chicken Barbecue to raise funds for Boy Scout Troop 189 at Riverside Park.

This year’s barbecue was especially noteworthy and will go far to support the Scouts, according to Troop 189 Scoutmaster Lee Theriault.

“We served 1,017 meals, a record year,” Theriault said. “The funds are used to purchase and maintain camping equipment, defray costs of outings and camping trips and to provide for troop operations.” 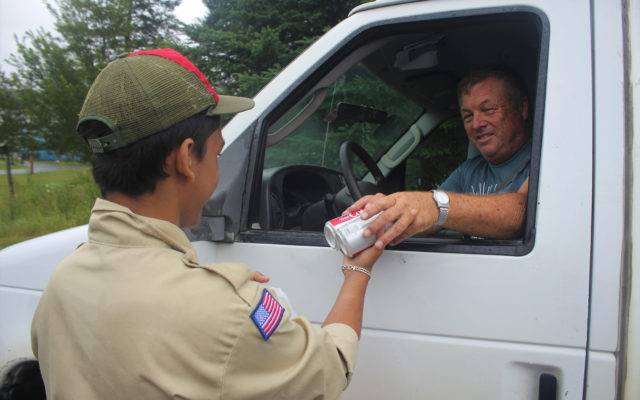 A member of Boy Scout Troop 189 serves up some take-out to Dennis Cyr of Fort Kent at the Lions Club Chicken Barbecue on Thursday, Aug. 8. Proceeds from the annual fundraiser benefit the local Scouts. (Jessica Potila)

The meals included half-chickens which Lions Club members cooked on a giant charcoal grill and slathered with barbecue sauce, crispy corn on the cob, a tinfoil cooked baked potato, cole slaw and strawberry shortcake on a homemade biscuit.

The Scouts were responsible for selling the tickets and serving up the meals to customers for pick-up straight from their vehicles in one of several take-out lanes at the park or for dine-in at picnic tables under the Lions Pavilion.

Sawyer Daigle, 12, was among those who helped serve up this year’s meal. Daigle, a second-year Scout, said he plans to become a police officer when he is older.

“I became a Boy Scout because it means something to me and I wanted to try and accomplish something really big and good that can help me a lot in life,” Daigle said.”I enjoy the people and everyone is so kind to each other and so respectful. It’s just a wonderful thing.”

Michelle Labbe was among the many volunteers who helped make the barbecue a success. She is the mother of Eagle Scout Jordan Labbe, as well as the mother of Boy Scout Hudson Labbe, who is working to become an Eagle Scout.

Michelle Labbe, a long-time Troop 189 volunteer, took it upon herself to complete a food safety training course through the University of Maine Cooperative Extension and passed on her knowledge to the Troop members prior to this year’s barbecue.

“We just wanted to make sure we were being as sanitary as possible because we feed so many people,” Labbe said.

Lion Travis Duval was the barbecue chairman, and oversaw the cooking of more than 1,000 chicken halves. He said the Scouts are a lot like the Lions in terms of their willingness to contribute to others, and he hopes to see them continue along this path as they get older.

“We support the Boy Scouts because they are young community members and we believe this helps grow a belief in community service and makes them well rounded individuals,” Duval said.

Theriault said he and the Scouts appreciate the support they received from those who purchased chicken barbecue tickets as well as the Lions who donated their time and efforts to host the barbecue.

“Troop 189 would like to thank everyone who has helped to make the chicken barbecue a huge success, especially the Fort Kent Lions Club,” Theriault said.

Deep low pressure near Newfoundland will keep breezy conditions across the SJV today and tonight as it interacts with high pressure building down from the northwest.
Our Sponsors END_OF_DOCUMENT_TOKEN_TO_BE_REPLACED