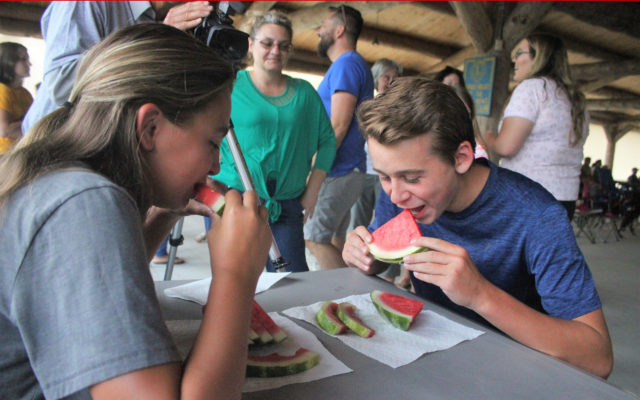 Competitors gobble their way to victory at watermelon eating contest

Jessica Potila, SJVT / FhF Staff Writer • August 7, 2019
It was the perfect day to down copious amounts of watermelon on a hot and humid Tuesday evening in Fort Kent, and dozens of contestants did just that when Paradis Shop ‘n Save sponsored a watermelon eating contest at Riverside Park in Fort Kent.

FORT KENT, Maine — It was the perfect day to down copious amounts of watermelon on a hot and humid Tuesday evening in Fort Kent, and dozens of contestants did just that when Paradis Shop ‘n Save sponsored a watermelon eating contest at Riverside Park in Fort Kent.

The contest was one of many events which will take place during the weeklong Fort Kent 150th anniversary celebration.

Brother and sister Grady Ruth, 14, and Riley Francis, 12, of Southington, Connecticut, entered the ages 11-15 category of the competition which Grady won by eating a whopping 16 pieces of watermelon. His younger sister was not far behind, having consumed 13 pieces of watermelon.

As the siblings broke down laughing several times during the competition, they had a cornerman coaching them on in their father, Andy Ruth.

“Come on, come on,” Andy Ruth yelled. “There’s a 9-year-old girl down there who just ate her tenth.”

Afterward, Andy Ruth said of his children, “I was just proud they did it. It wasn’t about them winning, just doing something together.”

Lallemand admitted he may have come into the watermelon eating contest with some competitive eating experience under his belt.

“This was not my first time at the rodeo,” Lallemand said.

Lallemand explained his strategy for winning the competition.

The youngest winner of the competition was 5-year-old Seamus Kilcollins of Fort Kent, who ate six pieces of watermelon to defeat other children in the ages 4-6 category. All of the children in this category selected a prize following the contest. Kilcollins chose a tabletop foosball game, which he plans to play with his older sister Persephone Kilcollins.

Donna Daigle of Paradis Shop ‘n Save said she was pleased to see the large crowd that gathered at the Lion’s Pavilion to cheer on the contestants in the watermelon eating contest.

“We live in a great community,” she said.

Mostly cloudy skies are expected across Fort Kent today. Clouds will thicken this afternoon as an area of low pressure quickly moves east from the Great Lakes and crosses Maine tonight then heads into the Maritimes Thursday morning.
Our Sponsors END_OF_DOCUMENT_TOKEN_TO_BE_REPLACED