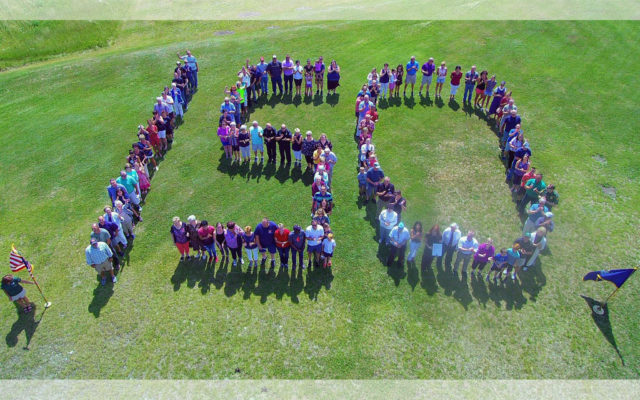 Among those who attended the event were Karina Conover and her husband, Dr. George Conover, who moved to the town from New Jersey in 1985.

The couple only planned to stay in Fort Kent for three years, so that Dr. Conover could complete an obligation to the National Health Service Corps. 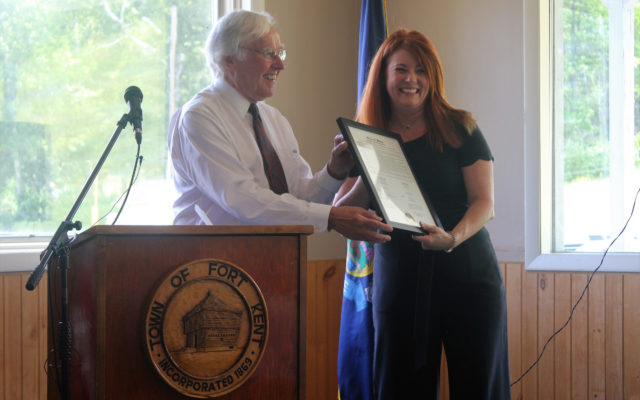 “At the time, they needed someone to deliver babies,” Karina Conover said.

“It’s a great place to live and it was a great place to raise our children. We just loved it; we loved our jobs and our kids loved growing up here,” Karina Conover, who worked for many years as a speech language pathologist for SAD 27, said on Sunday. “The community embraced us professionally and personally. We have great friends and it’s a wonderful place to live.”

Fort Kent was incorporated as a town in 1869. A group of more than 20 volunteers formed the Fort Kent 150 Years Committee to plan the celebration of the town’s birthday, which will include a week of fun activities for community members and visitors of all ages through Saturday, Aug. 10. 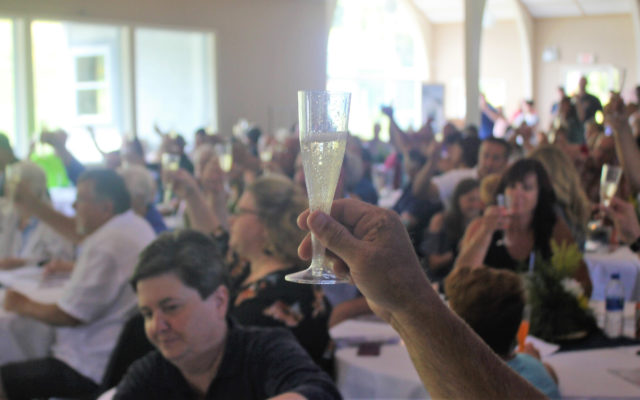 “When faced with a challenge, Fort Kent can always be counted on to come through, no matter what, not just come through but shine,” Malmborg said.

Fort Kent Town Manager Suzie Paradis highlighted the history of Fort Kent, from its days as a horse and buggy town to one which now hosts the University of Maine at Fort Kent, Fort Kent Outdoor Center, an International bridge, an award winning hospital and 17 miles of multipurpose outdoor trails.

“We have 150 years of history to be proud of,” Paradis said. “Since it’s beginning, the town developed on the backs of hard working citizens that gave of themselves to the industries they worked for and the community they loved.”

Rep. John Martin, who, along with Maine Senate President Troy Jackson, attended the opening ceremony event and presented the town with a legislative sentiment, pointed out that one of Fort Kent’s greatest attributes is the many citizens who volunteer their time to make the town a better place to live.

“There is no other place like it anywhere. I also want to point out that the only golf course facility that was funded by the federal government and did not go bankrupt in this country was the Fort Kent Golf Course,” Martin said. “That tells you that if it had been without the volunteers that place would not have made it either; there is absolutely no question about it.”

President Jackson said that “Fort Kent has always held a special place in my heart.”

He said it is where he attended several years of high-school and where both of his children attended school. Jackson said he lived in Fort Kent when he first ran for office, successfully, as a Maine State representative years ago.

“The people of Fort Kent were the first people to take a chance on me, a fifth generation logger from Allagash. If it wasn’t for the people of this community I wouldn’t be Senate President today,” he said.

Jackson also said that those representing Maine in Augusta are aware of Fort Kent, which has a positive reputation at the State House.

“When we’re down there people really speak very highly of the people in Fort Kent because of the hospitality and the way things are done here, the way people treat each other,” Jackson said.

Paradis said that throughout the town’s history, the people of Fort Kent have always been, and will remain resilient.

“Regardless of what challenges we have had or what the future holds, Fort Kent has always looked at its history for guidance to put a path forward into the future,” she said. “The advantage today is we have 150 years of experience to know that whatever obstacles lay before us, we are always up for the challenge.”

A free brochure containing a schedule of events for the Fort Kent 150th Anniversary Celebration, which will include a parade, street dance and fireworks, is available at the Greater Fort Kent Area Chamber of Commerce office, at the Fort Kent Town Office and at various local retailers.

A warm front will approach the Valley today and cross the region this evening.
Campaign Corner END_OF_DOCUMENT_TOKEN_TO_BE_REPLACED

Dale Crafts filed his nomination papers for Feb. 21 with the Secretary of State to officially be placed on the primary ballot on June 9, 2020, for the U.S. House of Representatives 2nd District race.
Our Sponsors END_OF_DOCUMENT_TOKEN_TO_BE_REPLACED