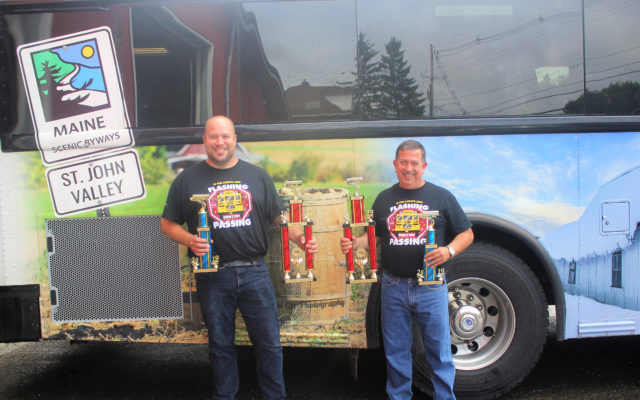 FORT KENT, Maine — The top two most skilled school bus drivers in Maine transport children right here in the St. John Valley, according to the results of the Maine Association for Pupil Transportation 2019 Driving Skills Competition.

The Maine Association for Pupil Transportation promotes safe and efficient travel for school-age children to schools and school-related events, according to the non-profit group’s website.

The categories included tests of backing up around traffic cones, parallel parking, changing lanes, and a pre-trip check which required the drivers to assess for bus safety within five minutes, complete with planted dangers.

“I still don’t believe I won; it’s been a goal of mine for a long time. My wife was with me. She’s my lucky charm. She keeps me calm,” Labbe said. “I feel like Dale Earnheart and I just won the Daytona 500 — the Daytona 500 of bus driving.”

Labbe and his wife Elaine have two adult children.

SAD 27 Director of Transportation Peter Saucier expressed his pride in Labbe’s success at the competition.

“It’s an honor to have a driver of Ricky’s caliber on our driving team,” Saucier said.

Morin, 37, drives for the Madawaska School District and took second place in the 2019 Driving Skills Competition.

“I was very surprised. I did not think I was gonna place to be honest with you,” Morin said. “I didn’t expect it.”

Morin, a father of five, along with his wife Keren Morin, said he enjoys working as a bus driver.

“I really enjoy the kids; I really do. It’s challenging but rewarding,” he said. “You become that consistency in their life. For some of them it’s not fun at home so you start the day with a smile to greet them and you leave them with a smile in the afternoon.”

Valley Unified Superintendent Ben Sirois said being a bus driver is more than about driving ability.

Sirois said he is happy, yet not surprised that two Valley Unified drivers took the top spots in the state competition.

Despite his excitement about winning the bus driving competition, Labbe said he feels like a winner each summer when he makes his last run of the school year.

“I tell the kids when they get on my bus, ‘the number one thing is safety. I gotta make sure I get you to school safe and home safe.’ When the school year ends every year in June and everyone made it safe, that’s a trophy,” Labbe said.

With his first place win in the state of Maine, Labbe will move on to the National School Transportation Association school bus skills competition in July 2020 in Niagara Falls.

A cold/occluded front will approach from the Great Lakes today with showers likely this afternoon along with a chance for thunderstorms.
Campaign Corner END_OF_DOCUMENT_TOKEN_TO_BE_REPLACED

Dale Crafts filed his nomination papers for Feb. 21 with the Secretary of State to officially be placed on the primary ballot on June 9, 2020, for the U.S. House of Representatives 2nd District race.
Our Sponsors END_OF_DOCUMENT_TOKEN_TO_BE_REPLACED