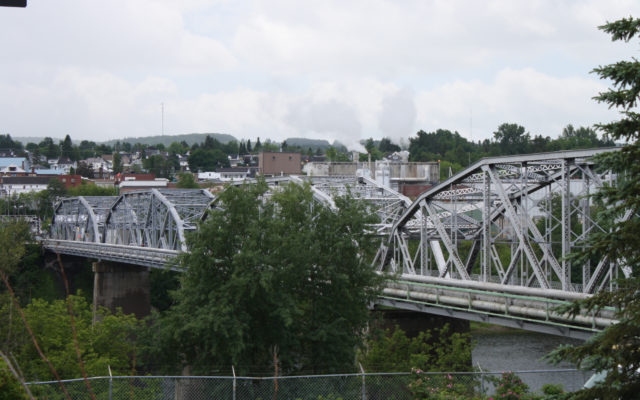 Morgan Mitchell • July 24, 2019
The federal government’s $36 million award to the state of Maine to be used toward the replacement of the Madawaska International Bridge will not only allow the bridge project to continue, but also will maintain an “aggressive timetable,” according to  Joyce Taylor, Maine Department of Transportation’s chief engineer.

MADAWASKA, Maine — The federal government’s $36 million award to the state of Maine to be used toward the replacement of the Madawaska International Bridge will not only allow the bridge project to continue, but also will maintain an “aggressive timetable,” according to  Joyce Taylor, Maine Department of Transportation’s chief engineer.

Officials with the Maine and New Brunswick transportation agencies, engineering consultants and other representatives from U.S. and Canadian federal agencies unveiled plans in January to build the new bridge extending from the existing span’s location in Edmundston and ending about 1,300 feet up the St. John River from the existing port of entry in Madawaska.

The bridge was built in 1921 and is about 20 years beyond its anticipated lifespan. After engineers expressed concerns about the bridge’s structural integrity in October 2017, officials restricted the bridge’s weight limit to five tons, severely limiting heavy commercial traffic. That action also prompted officials to move up the timeline for a resolution.

On Monday, Sen. Collins announced the grant award to Maine’s Department of Transportation. The $36 million grant will go toward the total estimate of $73.5 million, with the remaining $37.5 million to be split 50/50 between Maine and New Brunswick.

Madawaska Town Manager Gary Picard said Tuesday that part of the reason the bridge is such an expensive and complicated project is because of factors such as different utilities that intersect with the bridge and Edmundston’s new land port of entry.

“It’s a great thing the funding did come in,” Picard said. “It certainly helps the state out tremendously seeing that it is a costly project.”

Picard said the surrounding communities were asked in December to write letters of support for the grant and that Madawaska was happy to oblige.

This week, MaineDOT announced that all lanes of the bridge will be closed from 7 a.m. to 1:30 p.m. July 22-27 and July 29-30 to allow an engineering firm to conduct a thorough safety inspection of the structure.

“I am hopeful that the old bridge will stay open for a few more years until the new bridge is open for service,” Picard said.

He added that he, along with other town officials, advocated for the current bridge to stay open during the construction of the new bridge, which is slated to be completed by either fall 2022 or spring 2023.

Ricky Nadeau, owner of Big Rick’s Burgers and Wings at the intersection of Main and Bridge streets, said this grant to MDOT is a “huge win” for the town and would give all business in the area a much needed economic boost.

“There will be hundreds of full- and part-time employees needed for the project and millions of dollars poured into our little community,” Nadeau said. “We should consider ourselves very lucky and embrace the project with open arms.  It’s also a great way to introduce people from near and far to see what The County has to offer. Who knows, some may relocate here permanently or at least bring their families here to vacation in the future.”

Heavy snow is expected to overspread the Valley this afternoon and continue into the evening hours.
Crown Politics END_OF_DOCUMENT_TOKEN_TO_BE_REPLACED

Maine’s longest serving legislator, Martin was first elected to the Maine House of Representatives in 1964 when he was 23.
Our Sponsors END_OF_DOCUMENT_TOKEN_TO_BE_REPLACED