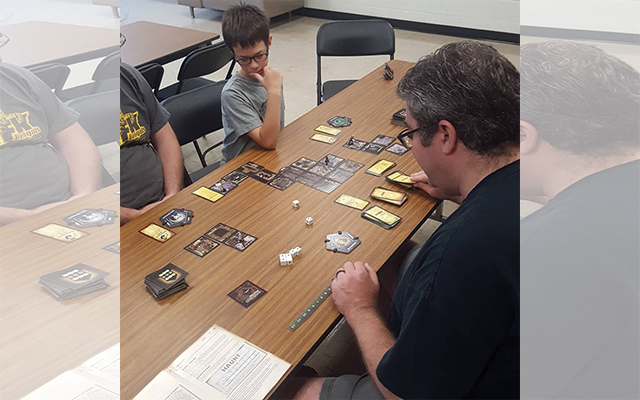 If they didn’t already know, those who attended the first Wendicon Tabletop Game Convention on Saturday, July 20, at the University of Maine at Fort Kent Sport Center soon discovered it, as this was just one of many unique games available at the event.

A description of the game, which is named in honor of the notoriously laid back painter and host of the PBS show, “The Joy of Painting,” is available at gamegeek.com.

“If you want to paint with Bob Ross, you need to be chill, so whoever reaches maximum chill first in Bob Ross: Art of Chill Game wins,” the description reads in part.

Board game enthusiast Dr. Cameron Grange of Fort Kent organized the Wendicon convention out of a desire to spread the fun he experiences by playing board games.

“I enjoy playing tabletop games and sharing those games with others,” Grange said.

“One of the purposes I had for Wendicon was to be a place where people could come and see or try a game that they have never played or even heard of. Each game has its own appeal.

“The party games give a license to be silly with friends, and show off a little bit. Strategy games are a good way to channel that competitive edge. Cooperative games, one of my favorites, don’t make you choose between your friends. My favorites are the narrative-driven cooperative or semi-cooperative games, because I like working together with my friends,” he said. “Some games are a way to overcome puzzles and problems.

“At the end of the day it’s identifying a problem and seeing what shape it takes as the game unfolds and reaches its conclusion.”

Grange coined the term ‘Wendicon’ to name the event.

“I wanted something fun and easy to pronounce. I also like myths and legends, and the wendigo is a regional legend from the northern United States and Canada; from there just add ‘con’ for convention. I was debating between that and Moosecon, but Wendicon sounded better,” he said.

Other games at the event included  “Organ Attack!,”“Magic: The Gathering,”“Betrayal at House on the Hill,” and the uniquely named “You’ve Got Crabs.”

Grange said that although the first Wendicon Tabletop Game Convention did not draw as many players as he had hoped, he will most likely return the event for a second installment early next year.

“I didn’t really have the turnout I was hoping for. I wasn’t as successful at getting the word out as I would have liked. I happened to choose the same day as the Potato Blossom Festival, and a lot of people were out enjoying the weather,” he said.

“I am toying around with doing this again at the end of winter break. As a small test I think this was successful to work out the kinks, but we’ll see where it goes.”

As the Maine Turnpike expects 1 million travelers alone over the Labor Day weekend, policymakers are gearing up for a sprint to solve one of the state’s most intractable problems: a long-standing — and growing — transportation funding gap.
Apex Weather END_OF_DOCUMENT_TOKEN_TO_BE_REPLACED

Mostly cloudy skies will develop after midnight as a warm front moves across the area with some snow flurries possible overnight.
Our Sponsors END_OF_DOCUMENT_TOKEN_TO_BE_REPLACED