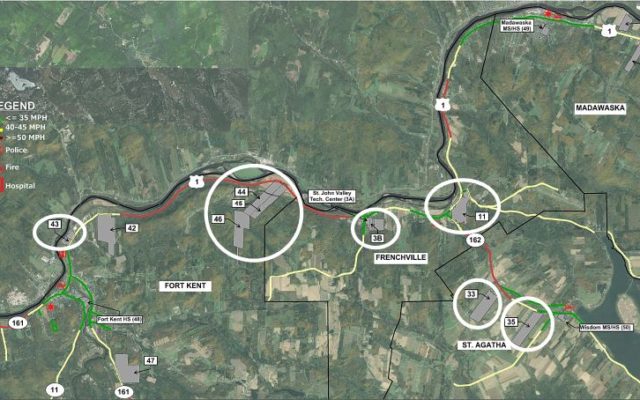 Valley Unified sites narrowed down, Madawaska out of the running

Among the casualties were the three remaining sites in Madawaska, which were eliminated based on several reasons, including weighted travel time and site size.

Administrators and school board members from Madawaska School Department and SADs 27 and 33 in the Fort Kent and Frenchville areas have been working together for about three years to combine resources and save money in an effort to address declining enrollments and rising costs in education.

In March, the Valley Unified board voted to select WBRC Architects and Engineers of Bangor upon recommendation by the Site Selection Committee of 17 after conducting a series of interviews.

During the May 14 meeting, Ray Bolduc from WBRC Architects/Engineers reviewed the site selection criteria matrix that each member of the Site Selection Committee would use to rate potential sites. With more than 40 sites to review, the criteria matrix took into account things such as impact on wetlands, drainage, adjacent land use, offsite, sidewalks, the site’s history, transportation miles, the lot size, high performance school site and safety.

With the conclusion of the July 16 meeting, the committee narrowed the possibilities down to six potential sites, taking into consideration part of the architectural firm’s recommendation. Bolduc said they took into consideration much of the matrix, but hadn’t gone through the entire matrix for each site.

Paul Cyr asked the firm how they could recommend eliminations if they hadn’t sorted through the entire criteria. Gerald Clockedile, the regionalized facilitator for Valley Unified, said if the firm went through half of the matrix and already knew some sites were unsuitable just based on that half of the matrix, then why continue exploring that site?

The firm also considered travel time and came up with a weighted travel time for each site based on the student population for each community and the distance from each site.

“We’re trying to eliminate sites based on our experience,” Bolduc said.

WBRC also received a traffic study for the sites on July 15 and used that to recommend eliminating sites 44, 45, and 46 at the Fort Kent-Frenchville town line. The firm recommended those sites collectively be scrapped due to the speed limit, wetland drainages, and the absence of a water or sewer line.

Committee member Lester Ouellette said the committee should consider those locations despite the wetland areas.

“When you’re teaching science and you want to go out into the field, don’t cut down all your trees,” Ouellette said.

Removing those three from the line-up of potential sites would have narrowed the list down even further, however, the committee moved to keep those sites in review, despite the “recommendation from a traffic consultant to eliminate those sites,” according to Bolduc.

The Department of Education requires that the original high schools be reviewed as well to see if the existing buildings and/or lots could be used. So far, all of the existing high schools have been removed from the list with the exception of the St. John Valley Tech Center.

Site size, proximity to train tracks, transmission lines, multiple owners per parcel, and flood plain status were all factors in eliminating the two proposed sites and the existing high school in Madawaska.

The next steps following the elimination of the sites would be to continue evaluating possible sites using the matrix criteria, coordinate visits with committee members, and to update the committee at the next meeting at 4 p.m. Tuesday, Aug. 27, at the Fort Kent Community High School.

Cloudiness in the region Thursday afternoon along with a slight chance for isolated showers Thursday night and Friday.
Crown Politics END_OF_DOCUMENT_TOKEN_TO_BE_REPLACED

The Aroostook County Republican Committee will hold their election year County-wide caucus from 9 a.m. to noon on Saturday, Feb. 12, at the Presque Isle Inn & Convention Center.
Our Sponsors END_OF_DOCUMENT_TOKEN_TO_BE_REPLACED