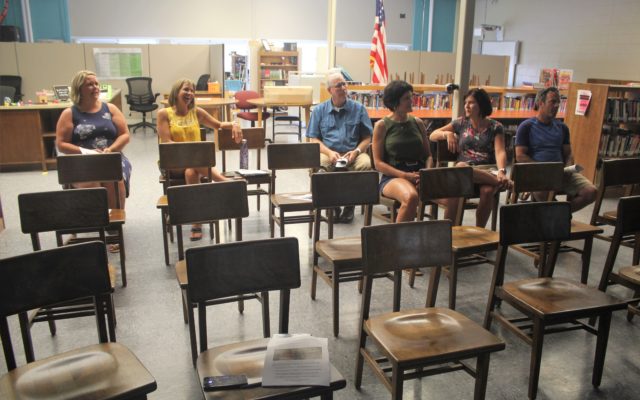 Morgan Mitchell and Jessica Potila, Special to the Fiddlehead Focus • July 19, 2019
Valley Unified officials have held -- and will hold more -- information sessions with question and answer periods for members of the community who want to learn more about Valley Unified or the proposed regionalized pilot high school in the St. John Valley.

ST. JOHN VALLEY, Maine — Valley Unified officials have held — and will hold more — information sessions with question and answer periods for members of the community who want to learn more about Valley Unified or the proposed regionalized pilot high school in the St. John Valley.

Last year, the state authorized funding Valley Unified up to $100 million for a new regional high school that would replace the three existing high schools in SAD 27, SAD 33 and the Madawaska School District.

The new regional school will serve students from Grand Isle to Allagash, integrate technical and career training, and include some post-secondary education aspects if voters and the Department of Education ultimately approve the plans for the new high school.

The information sessions have been split into a slide show and a question and answer session. During the slideshow led by Valley Unified Superintendent Ben Sirois, audience members learned about the background for Valley Unified and how the three original school administrative units came together to design a solution to combat a steady decline in enrollment to the Valley schools.

“Being separate gives us limited resources,” he said.

By the same token, Sirois said it was important for people to know that Valley students would not be overwhelmed by the new high school.

“The graduating class size of Valley Unified will be about 115 students, a little bit bigger than Caribou and a little bit smaller than Presque Isle, so not a huge school,” he said.
He put the size of the new high school into perspective by pointing out that it would fall into the category of a Class B high school for sports.

During the information sessions at Wisdom Middle High School and Fort Kent, the audience members and Sirois alike expressed concerns that misinformation about the Valley Unified project is being shared on social media and in local businesses around the towns.

“Our goal is to share what the facts are,” Sirois said of the informational meetings.

Some in the audience commented on the use of social media in conjunction with being correctly informed on the subject matter.

“One person that you hear about in Madawaska, every week in social media, he’s only got one arguement — if we don’t have a high school in Madawaska, then the town is dead,” Beurmond Banville, a selectman in St. Agatha, said at the Wisdom session. “That’s his personal opinion. In the same way he’s never educated himself on the proposals for this … But he’s very vocal in saying ‘No,’ and those of us who are looking to the future are not vocal enough.”

One of the community members in attendance at Wisdom High School was St. Agatha Town Manager Aubrie Michaud who also expressed concern with the number and make-up of attendees.

“It’s the people who are most frustrated who aren’t going to a meeting,” she said during the information session.

At the Fort Kent meeting, one woman expressed concern that so few people were attending the informational meetings.

“What will it take and how can we get them here,” she asked. “What is it, because people need to know because you have your 10 keyboard warriors who are incorrectly informing a lot of people making these decisions, and I just really feel like we need to focus on something about getting people here.”

Sirois replied that he feels when members of the community are made aware of potential savings of tax dollars with the new high school, it will draw more community interest.

“I think when we have cost figures, I think it’s gonna draw more people,” he said. “I think schools, for whatever reason locally are looked at as an expense, not as an investment; so in that light because they’re an expense I think when we can start to show numbers you know and how that impacts taxes … When we start to have that (information) it’s gonna bring people in and that’s the hope.”

Sirois asked that people who attend the meetings remind other community members that a Valley Unified travel bus, which serves students in all three administrative units, was purchased through federal grant money, and was not purchased with funds from local dollars.

On the topic of busing, Sirois said a large concern he has heard has to do with transportation for students and how far each community’s students will have to travel.

“Kids don’t want to be bused during the day,” Sirois said on the students who have to travel during the day to go to the St. John Valley Tech Center.

From Madawaska alone, the average student who attends special programs at the St. John Valley Technology Center spends a total of 28 days a year traveling from point A to point B and back again. That’s 28 days of school they could be in the classroom, or at an internship, or job shadowing that they are missing out on, according to Sirois.

The informational session presented in Madawaska is available for viewing online.

As the Maine Turnpike expects 1 million travelers alone over the Labor Day weekend, policymakers are gearing up for a sprint to solve one of the state’s most intractable problems: a long-standing — and growing — transportation funding gap.
Apex Weather END_OF_DOCUMENT_TOKEN_TO_BE_REPLACED

The Valley will receive an inch or less of accumulation from Thursday's system based on current forecast model data.
Our Sponsors END_OF_DOCUMENT_TOKEN_TO_BE_REPLACED