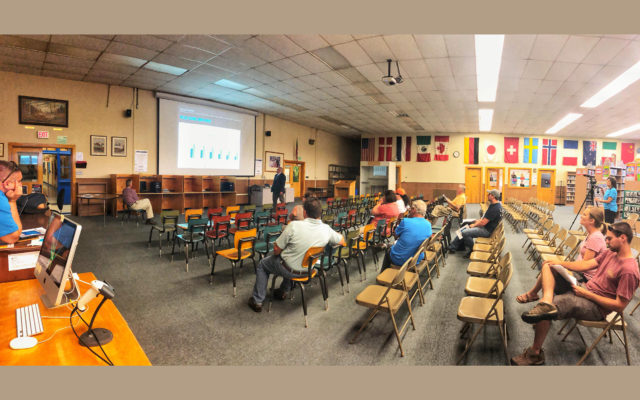 Morgan Mitchell • July 12, 2019
Valley Unified officials have held -- and will hold more -- information sessions with question and answer periods for members of the community who want to inquire about the process regarding the formation of Valley Unified or the proposed regionalized pilot school.

ST. JOHN VALLEY, Maine — Valley Unified officials have held — and will hold more — information sessions with question and answer periods for members of the community who want to inquire about the process regarding the formation of Valley Unified or the proposed regionalized pilot school.

The three Valley school districts are in the process of securing up to $100 million from the state to build a pilot consolidated school that would combine high schools, integrate technical and career training, and include some post-secondary education aspects.

The most recent meetings in Madawaska and Frenchville both had small numbers of attendees with only eight community members at the Madawaska session and six at the one at the St. John Valley Tech Center in Frenchville.

Each session was split into two parts: first, an information slideshow and then a question and answer period.

During the slideshow led by Valley Unified Superintendent Ben Sirois, audience members learned about the background for Valley Unified and how the three original school administrative units from Madawaska, MSADs 27 and 33 came together to come up with a solution to combat a steady decline in enrollment to the schools in the Valley.

In June, the Site Selection Committee made a motion to reduce the more than 40 sites down to 11 potential sites to be reviewed by engineering firm WBRC using a matrix determined by the committee. The matrix took into account things such as impact on wetlands, drainage, adjacent land use, offsite, sidewalks, the site’s history, transportation miles, the lot size, high performance school site and safety.

The list of those 11 sites was released earlier this month and will be reviewed by WBRC and presented to the committee at 6 p.m. Tuesday, July 16, in the Madawaska Middle High School library.

Resident Nathan Beaulieu asked questions regarding the sharing of costs associated with transportation needs. Sirois recapped the cost-sharing break down.

In efforts to make things fair, at the January meeting the board said they took into consideration the student enrollment and interlocal agreements and determined that the local share will vary by community, depending on the valuation and projected student population of each member town as determined by a Valley Unified interlocal agreement.

Another concern of the audience was the potential loss of identity when the three SAUs merge into one regionalized high school. Former Madawaska Superintendent and current Valley Unified Assistant Superintendent Gisele Dionne addressed the question with an instance that happened in April.

Two weeks into softball practice this season, Wisdom High School Principal Ralph Fantasia said the school in St. Agatha couldn’t get more than eight girls to commit to the team, even if officials enlisted eighth-graders. So the principal took it to Madawaska School Department to ask if his students would be able to participate with the Lady Owls this season.

The girls were welcomed with open arms, according to Dionne, who added that she only heard good things from the coaches and athletic director.

During the information session at the St. John Valley Technology Center, Paul Cyr of Fort Kent brought up the possibility of a school shooting in reference to the location of the school and if it were to be built, how safe it would actually be.

“Our 75-plus-year-old high schools were not built with the safety measures that new schools are now equipped with,” Dionne said. “For example, our elementary school in Madawaska, the youngest school in the Valley, at 25 or so years old, was built with the reception desk in the middle of the school, where visitors must walk to before being seen. Those times were different.”

Dionne added that the age of the high school has made it so the Madawaska School Department had to add keyless entries and a video phone at the main entrance. The school was also the first in the Valley to go through the ALICE active shooter program.

“It helps, but once a person has entered the school, there is no other level of isolation for that visitor. New schools have foyers or vestibules to isolate visitors who sign in and wait for their child,” she said. “All the schools we visited had that initial security level, in addition to other safety measures.”

This past winter, Valley Unified took members of the community, board, and Site Selection Committee on a couple trips down and out of state to view other schools that were built with the future in mind — including security.

At the conclusion of the information sessions, Sirois stressed the importance of the possibility of a new school and said that he was “tired of southern Maine getting all these beautiful things.”

“For me this is all about opportunities for the kids” he said. “I do not care where the thing is built … We need to make it work for the future of our communities.”

Incumbent Sen. Michael Carpenter and Rep. Harold “Trey” Stewart III, R-Presque Isle, are the expected nominees for their respective parties in this year’s election for a two-year term in District 2 of the Maine State Senate.
Apex Weather END_OF_DOCUMENT_TOKEN_TO_BE_REPLACED

High pressure will move east today while an upper-trough approaches from the west crossing the region tonight. A cold front will approach later tonight and cross the Valley early Thursday.
Our Sponsors END_OF_DOCUMENT_TOKEN_TO_BE_REPLACED