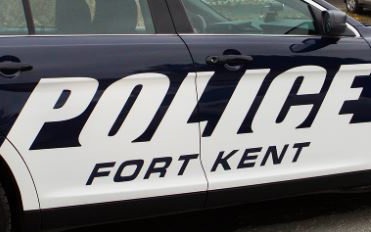 Jessica Potila, SJVT / FhF Staff Writer • July 8, 2019
A 14-year-old girl suffered from head injuries after the all-terrain vehicle she was driving plunged over a 30-foot embankment. Rescue personnel used a Stokes basket to lift the injured teen to safety.

FORT KENT, Maine — Just one day after an 11-year-old girl was critically injured in an ATV accident on Pelletier Island on Long Lake, volunteer firefighters with the Fort Kent Fire Department rescued a 14-year-old girl after an ATV she was driving sailed over a 30-foot embankment in Fort Kent.

The latest accident occurred at around 6:15 p.m. on Saturday, July 6.

Two females, the 14-year-old from Temple, Texas, and her 8-year-old passenger from Richmond, Maine, were riding a 2002 Yamaha Grizzly ATV on a relative’s property near 1462 Frenchville Road when the machine and the girls dropped down an embankment, hit a tree and landed in heavy brush. Both girls were wearing safety helmets according to Cpl. John MacDonald of the Maine Warden Service.

The 8-year-old girl was able to climb up out of the embankment but the 14-year-old girl was too badly injured to do so. Six firefighters responded to the call to the scene of the accident, along with one engine and the squad truck, a utility brush vehicle the department acquired with a FEMA grant just last September.

The firefighters were able to rescue the trapped and injured teen by lowering a Stokes basket down the embankment with a winch from the squad truck and lifting her to safety.

As of Monday afternoon, the teen was expected to be transferred to a hospital in Boston for treatment of fractures to her skull, facial bones and wrist.

The accident resulted when the young driver of the ATV failed to negotiate a turn, MacDonald said.

Relatives were nearby when the accident occurred and no charges will be filed, according to MacDonald.

A cold/occluded front will approach from the Great Lakes today with showers likely this afternoon along with a chance for thunderstorms.
Campaign Corner END_OF_DOCUMENT_TOKEN_TO_BE_REPLACED

Dale Crafts filed his nomination papers for Feb. 21 with the Secretary of State to officially be placed on the primary ballot on June 9, 2020, for the U.S. House of Representatives 2nd District race.
Our Sponsors END_OF_DOCUMENT_TOKEN_TO_BE_REPLACED