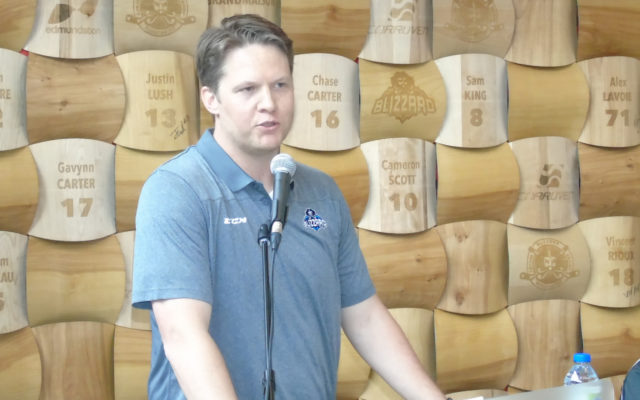 Contributed • June 11, 2019
The Edmundston Blizzard organization on June 3 announced the appointment of Emery Olauson as the team’s head coach.

EDMUNDSTON, New Brunswick — The Edmundston Blizzard organization on June 3 announced the appointment of Emery Olauson as the team’s head coach.

A native of Canmore, Alberta, Olauson is familiar with the Maritime Junior A Hockey League (MHL) as he was the head coach of the St. Stephen Aces last season.

“We were looking for a candidate who could adhere to our philosophy of management, a guy dedicated to the success of the team both on and off the ice. The experience and ability to manage the demeanor of 16 to 20 year old players were also very important factors. Emery brings all these qualities together and we are very proud to join our team whose goal is always to reach the highest peaks, “said Blizzard President André Lebel.

Against all odds last season, the Aces, a team in a rebuilding phase, managed to qualify in the playoffs for the second time only in their history. “For a reason we do not know, St. Stephen was our pet peeve last winter. We lost six games out of seven against them. Olauson certainly had a role to play in these successes against us. He is an excellent strategist. We are now happy to have him on our side, “exclaimed Mr. Lebel.

Olauson, 37, became a coach after a nine-season professional hockey career in the Central Hockey League (CHL) and the Southern Professional Hockey League (SPHL). He served as an assistant coach with the Flin Flon Bombers in the Saskatchewan Junior Hockey League (2012-13 and 2013-14). He became head coach of the Fayetteville FireAntz, a US professional team of theSPHL (2013-14 and 2014-15).

Then, for three campaigns (2014-15 to 2017-18), he was at the helm of the Grand Forks Border Bruins of the Kootenay International Junior Hockey League, a team he led in the playoffs at his first season (2014-15) after a 21-year playoff drought. During that season, he was earned both Coach of the Year for the Division and Coach of the Year for the 20-team KIJHL. Notably, the Border Bruins played in the playoffs in each of his three seasons as head coach and general manager. Last season at St. Stephen, he led the Aces to their highest win total and point total in franchise history.

“I am excited to become part of the Blizzard organization and look forward to getting started. My goal as a head coach is to continue learning how to connect with players to help them reach their goals and always be able to adapt to the challenges that arise each season with different groups of young men. Obviously, building a championship culture will always be central to my program. We will have very high standards on and off the ice for our players and staff,” said Olauson.

He described himself as a coach who puts the team in the foreground. “I am a team-first coach. I will always expect my players’ best. We will be a hardworking team. And everyone on our team will be expected to contribute to the overall on-ice success of the team and the enrichment to the community. I strive for my relationships with the players to be honest and consistent while asking for the same in return from the players. “

As the Maine Turnpike expects 1 million travelers alone over the Labor Day weekend, policymakers are gearing up for a sprint to solve one of the state’s most intractable problems: a long-standing — and growing — transportation funding gap.
Apex Weather END_OF_DOCUMENT_TOKEN_TO_BE_REPLACED

A cold front moved through the Valley early this morning, and it will be followed by an Arctic cold front this afternoon.
Campaign Corner END_OF_DOCUMENT_TOKEN_TO_BE_REPLACED