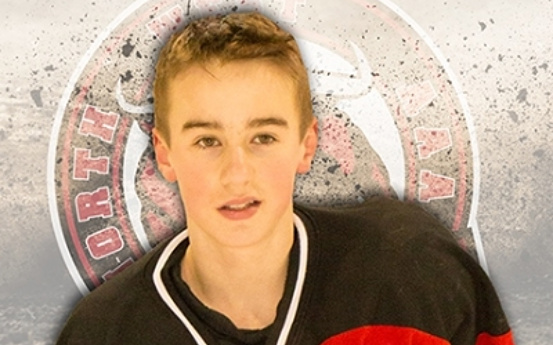 EDMUNDSTON, New Brunswick — The Edmundston Blizzard selected Josh Nadeau, of Saint-François-de-Madawaska, as its territorial pick. The announcement was made today by the Maritime Hockey League (MHL) which released the Territorial Draft selections.

The 15-year-old forward made a good impression on the past weekend when he was selected in the 5th round and 73rd overall by the Acadie-Bathurst Titan at the annual Quebec Major Junior Hockey League (QMJHL) Midget Draft.

In his first campaign at the AAA Midget level with the Fredericton Capitals last season, he had a fantastic year with 21 goals and 19 assists for 40 points in 32 games. He finished second in scoring for his team and first for goals.

This year, at the MHL Territorial Draft selections, five teams made the maximum of two selections. Three teams made one selection and will receive a compensation pick following the third round of the Entry Draft this Saturday. The four teams who did not make a territorial selection will receive compensation picks following rounds two and three of the Entry Draft.
Representatives of the 12 MHL teams will take part at the league’s Annual General Meeting on June 13th and 14th. The next day, it will be the highlight of the weekend with the draft to start at 9:30 am at the Jean-Daigle Centre in Edmundston.

As the Maine Turnpike expects 1 million travelers alone over the Labor Day weekend, policymakers are gearing up for a sprint to solve one of the state’s most intractable problems: a long-standing — and growing — transportation funding gap.
Apex Weather END_OF_DOCUMENT_TOKEN_TO_BE_REPLACED

A cold front moved through the Valley early this morning, and it will be followed by an Arctic cold front this afternoon.
Campaign Corner END_OF_DOCUMENT_TOKEN_TO_BE_REPLACED